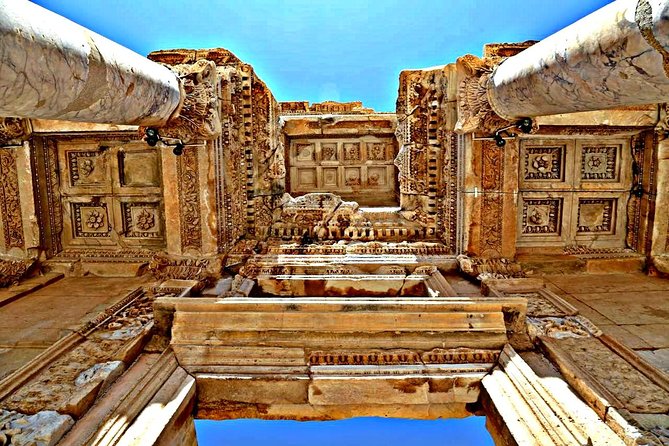 Enjoy a private, full day tour of the stunning ancient city of Ephesus. Visit the Temple of Artemis,The Library of Celcus, The Grand Theatre, and then head just outside of Ephesus to visit the final resting place of the House of virgin mary.

Ephesus is an historic and sacred destination almost beyond compare. A flexible shore excursion from Kusadasi you will receive a private guided sightseeing tour with air-conditioned transport to and from Ephesus. Your guide will meet you at the arrivals gate of Kusadasi port, Izmir Airport or your Izmir Hotel!

On arrival at Ephesus we enter through the Magnesia gate and begin a slow, downhill walk with your guide into the ruins of the former Roman provincial capital Your route will take you past the temple of Hadrian, the fountain of Trajan, the great theater and the spectacular Celsus library.

The showpiece of the archaeological remains, the library stands in remarkable ruins as a testament to the intellectual prowess of the Romans. At one time it may have contained as many as 15,000 scrolls in reading rooms where scholars met and studied. This is probably the most photographed exhibit!

During the visit of Ephesus you will also see the Terrace Houses which located on the hill, opposite the Hadrian Temple. Also called as the houses of rich, important for the reason give us information about family life during the Roman period. They were built according to the Hippodamian plan of the city in which roads transected each other at right angels.

After Ephesus we take a short but scenic journey to the church of The Virgin Mary .

According to Christian tradition, Mary was brought to Ephesus by the apostle John after the resurrection of Christ and lived her final days here. This church was erected on the foundation of that house, and its authenticity has been confirmed by Pope Paul VI and Pope John Paul II. many visitors describe this as an uplifting or spiritual experience.

You will also see ruins from the Ottoman empire and early Christian period. You will visit the house of the Virgin Mary. The Vatican has recognized this small house in the Solmissos mountains as the final resting place of Mary, mother of Jesus.

A small shrine dedicated to St. Mary was found when the ruins of the house were first discovered. Many visitors have described this as a spiritually uplifting experience.

Next, see the graceful columns and mosaics that remain of the Basilica of St John, built by the Emperor Justinian over the tomb of St John the Apostle. Enjoy the panoramic views of the rural Selcuk countryside and the ruins of the Temple of Artemis. This temple, also known as the Temple of Diana (the Roman goddess equivalent), was first built during the Archaic period and is one of the Seven Wonders of the Ancient World.

You will visit the site of the temple of Artemis, one of the seven wonders of the ancient world, dedicated to the goddess Diana, before transferring back to Kusadasi Port or Izmir airport.

Entry/Admission - The Temple of Artemis

Entry/Admission - The Basilica of Saint John