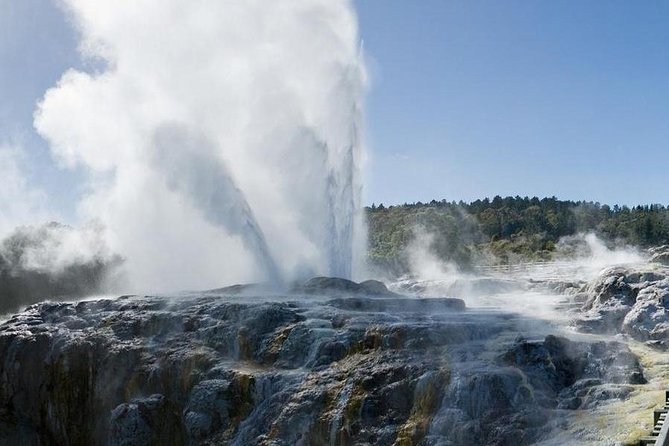 Guaranteed departure - We do not cancel on the rare occasions we have low numbers. We will travel for one person
Experience the birthplace of Tourism in New Zealand Rotorua! Rotorua is located in the North Island of New Zealand and is famous for its beauty, culture, and hospitable locals. On this tour you will learn about Maori culture, see the spectacular thermal activity, and travel through the breath-taking farmlands of the Waikato. Rotorua is a must-see when visiting New Zealand, you wont want to miss it!
This tour is flexible, with options to leave from and return to Auckland, or leave from Auckland and finish in Rotorua. Pleasenote if you do not purchase additional options you will have free time to either explore on your own without a guide or extra time at Te puia. Everybody will arrive back in Auckland at the same time.
You can book this tour one way and finish in Rotorua or return to Auckland at the end of the day

Located inside Te Puia this centre is where you can see the end product and the local Maori practising + learning the traditional carving, weaving and other traditional arts .

See geysers, visit the Kiwi house - explore on own or join a guided tour - A buffet lunch with a mixture of Maori traditional nad typical New Zealand food is included while you are at Te Puia
You can add a Maori concert for $15 per person

Live commentary on board given by experienced guide

Morning and afternoon tea available at own expense

Infant seats are required by law in NZ in private vehicles for children under 7 years - We recommend the same standard be applied for your child's safety and have them available in all vehicles for use of seat and child restraint for the day.

We must know where you are staying in Auckland