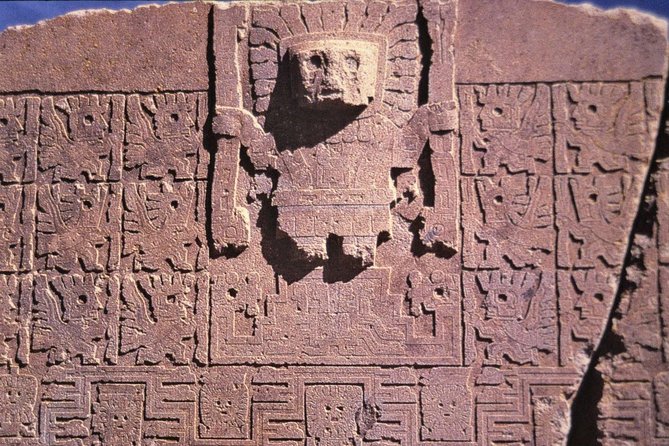 Tiwanakuwas the capital of the Tiwanakuempirebetween c. 200 - 1200 CE and is situated in the Titicaca basin. At an altitude of 3,850 meters (12,600 ft) it was the highestcityin the ancient world and had a peak population of between 30,000 and 70,000 residents. The Tiwanaku Empire, at its largest extent, dominated the altiplano plains and stretched from the Peruvian coast to northern Bolivia and included parts of northern Chile. Tiwanaku is located near the southern (Bolivian) shores of the sacredLake Titicacaand it would become the Centre of one of the most important of all Andean cultures. The architecture, sculpture, roads, and empire management of Tiwanaku would exert a significant influence on the laterInca civilization.

TIWANAKU WAS THE CAPITAL OF ONE OF THE MOST INFLUENTIONAL ANDEAN CULTURES.

The tour begins with your pickup from your selected Hotel in the city of La paz, this is a private Excursion over the high plateau, with a comfortable and fully equipped Private transportation and your Professional / expert guide, to be able to travel to the town of Tiwanaku, situated in the Titicaca basin. (InmythologyLake Titicaca was considered the Centre of the world, two islands on it were made into the sun and moon). At an altitude of 3,850 meters (12,600 ft) it was the highest Cityin the ancient world and had a peak population of between 30,000 and 70,000 residents. On our way driving to the most impressive Pre inca archeological site youll be able to see Andean landscapes Very picturesque, flora and much more.

Arriving in the village after a 2 hour trip, youll visit the most important and mysterious archaeological place, Tiwanaku was founded sometime in the Early Intermediate Period (200 BCE - 600 CE). The first examples of monumental architecture date to around 200 CE but it was from 375 CE that the city became grander in its architecture and scope. These new structures included large religious buildings, gateways, and sculptures. The layout of the city Centre was constructed on an east-west axis, built in a grid design, and the whole was surrounded by a moat (perhaps only symbolic) on three sides which linked with Lake Titicaca on the fourth side of the city.One of the oldest civilizations in America.

Youll be able to visit Tiwanaku that is the large open spaces for ceremonial and religious activities which employ fine monumental stonework, work which has long been admired including by the Incas. There are two principal types of walls - those with large irregular blocks and those with fine-fitting and straight-edged blocks.

The focal point of the sacred precinct was the Akapana templewhich was an artificial hill over 15 meters high and shaped into seven tiers. The Kalasasaya is another sacred structure, this time rectangular and measuring 130 by 120 meters. Its sacred sunken court provided space for public and religious ceremonies. The Pumapunku was another temple mound, once again with a T-shape sunken court but this time the mound has only three tiers. No storehouses or administrative buildings have been found at the site but there were large residential areas surrounding the sacred Centre.

During this magic time over the high plateau and amazing ceremonial place, the visit to this archaeological site will be told in its history and all about arquiteture, engineering and culture by our expert Tourism Guide, who will accompany you throughout this tour.

Once finishing this tour of approximately 2/ 3 hours, we will enjoy a typical lunch of local food at the proper place.

Finally climb on our private transport to return to the city of La paz and leave it at your proper hotel or place of preference.

The listed price does not include a $15 per person departure tax, payable at the time of tour check-in. The departure tax is required by our local supplier and/or the local transit or governing authority and is not within our control. this charge goes in case you need to be pickup / start the tour at the International airport of La Paz.

clients that would like to be pickup or start the tour at the international airport of el alto - La Paz need to pay aditional charges of USD 15.Per person.