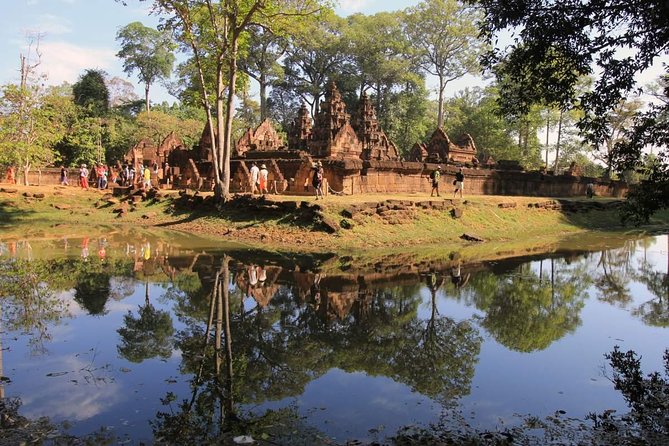 Daily Operate, clients will be join experiencebyvisit temple of Banteay Srei, with along the way countryside with 35km northeast of Siem reap. Built of fine-grained rose-pink sandstone, its the most elaborately decorated of all Angkors monuments, its walls, false doors, lintels and exotic soaring pediments all richly embellished with floral motifs andRamayanascenes.
After visit Banteay srei temple, we will continue to visit Prerup temple - Preah Dak Village, and thenvisitthe East Mebon ,East Baray,Prasat Neak pean and Preah khan.

The enchanting temple of Banteay srei is nearly everyone's favorite site. The special charm of this temple lies in its remarkable state of preservation, small size and excellence of decoration.

The unanimous opinion amongst French archaeologists who worked at Angkor is that Banteay Srei is a 'precious gem' and a 'jewel in Khmer art'. Banteay Srei, as it is known by locals, was originally called Isvarapura, according to inscriptions. It was by a Brahmin of royal descent who was spiritual teacher to Jayavarman V. Some describe it a s being closer in architecture and decoration to Indian models than any other temple at Angkor. A special feature of the exquisite decoration was the use of a hard pink sandstone (quartz arenite) where enabled the 'technique of sandalwood carving with even an Indian scent to it'.

Banteay Srei Temple, the pink sandstone temple was built by king Rajendravarman in the 10th century. Youll see that the walls of Banteay Srei temple are covered with the most deep and intricate carvings of any of the temples in Angkor.

Pick up and drop off from/at the hotel by van

Please be ready and wait from 7:30am - 8:30am at hotel lobby for pick up services