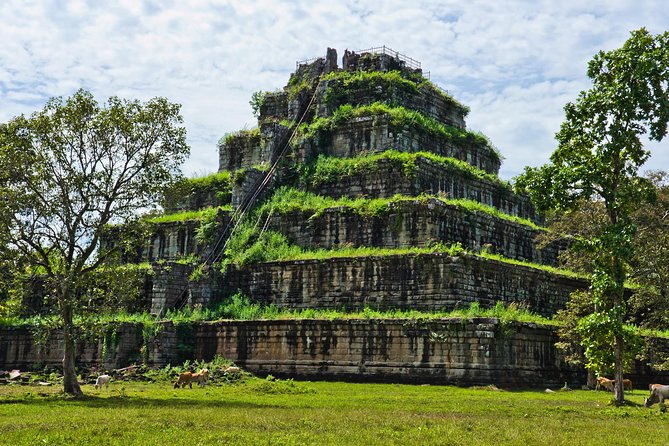 If you are looking for an adventurous lost temple feeling or a genuine explorer experience, undisturbed by noisy busloads - dont miss Koh Ker in Preah Vihear Province!
Then we will visit Beng mealea Temple, the atmospheric jungle temple Beng Mealea

If you are looking for an adventurous lost temple feeling or a genuine explorer experience, undisturbed by noisy busloads - dont miss Koh Ker in Preah Vihear Province!

Its the most amazing temple town in a distant jungle location off the beaten track, right in the heart of the remote and undeveloped countryside of northern Cambodia. Left to the vegetation for a millennium, the lonely temples of Koh Ker were not easy to reach for French exlorers in the 19th and 20th century and remained unrestored. Only two decades ago, this region was the last stronghold of Khmer Rouge guerilla fighters.

and then we will visit Beng Mealea Temple, the atmospheric jungle temple Beng Mealea, on the way to Koh Ker or in combination with other destinations closer to Angkor. Beng Mealea still looks like in the 19th century, when early French explorers found the huge complex swallowed by the jungle. Most parts of the long abandoned vast compound of Beng Mealea are not yet restored.

Built in the 12th century, most probably during the reign of King Suryavarman II, Beng Mealea is in the same style as Angkor Wat, in layout, construction techniques and decoration quite similar to it. But in contrast to Angkor Wat, Beng Mealea is mostly in ruins, with lichen-covered walls strangled by roots, trees growing on the temple towers and huge sandstone blocks lying in piles. Even the very centre of the temple compound is such a heap of stones, since the central tower has collapsed.

Vine-entangled ruins hidden in a forest and romantically draped in vegetation, thats the imagination of a lost temple in the junglecoming true in Beng Mealea!

Pick up and drop off from/at the hotel by van

Please be ready and wait from 7:30am - 8:20am at hotel lobby for pick up services