Excursion To Oplenac And Topola - Belgrade

Excursion To Oplenac And Topola - Belgrade 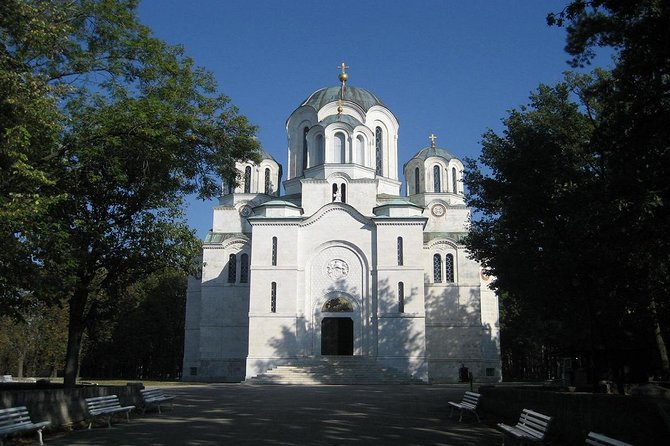 Our idea to take you on an interesting, carefully designed journey. Choosing us, you choose to hear unforgettable stories, not only about the Serbian rulers and the long history of viticulture and wine roads, but also stories about real traditional Serbia, cultural and historical monuments, untouched natural beauty.
When you check tourist map of Serbia, you will find Oplenac and Topola marked as an important place to visit.
Perfect day is the one spent right here in Sumadija, where you will meet history, lighten by the sun and enchanted by the scents and flavors

Departure from Belgrade to Topola as scheduled

Our journey begins in Central Serbia, on the slopes of Oplenac near small town Topola. And not accidentally. Serbian rulers have recognized the beauty of this part of Serbia. King Petar I Karadjordjevic built himself endowment with a magnificent Church of Saint George. Along with his son Aleksandar, he raised tens of hectares of vineyards and the cellar where they produced high quality wines.

Wine lovers and tourists are always been welcomed to Sumadija and will always be well hosted. On this wine route through Sumadija you can enjoy natural beauty of the landscape, the cultural and historical attractions, long years tradition with special characteristics of wine-growing areas in Sumadija. But primarily, you will meet people that could be seen only in Sumadija - sincere and kind hosts, hardworking and hospitable woman, cheerful and playful children. In Sumadija you will collect memories, which will always be close to your heart. We will take you on a special day trip created for all of the five senses.

The oldest archive wines in Serbia.
Visit to the Endowment of King Petar I which encompasses the church of St. George, the dynastic tomb of the Karadjordjevic family, Petars house and the Royal cellar. Petars house nowadays is a museum gallery. Royal cellar has two underground floors with constant temperature of 8 degrees Centigrade and 99 barrels of four thousand liters each. This cellar keeps some archive wines made of domestic grape sorts, so they are the oldest in Serbia.

A village of Vina, at the foot of Oplenac

...where Aleksandrovi Winery is situated, was always known for viticulture and winemaking. Sunny slopes, a rich structure of the soil, favorable winds and mild climate represent a natural gift which is translated to the top quality wines from Aleksandrovi Winery.

With 75 hectares of vineyards and annual production of 300,000 bottles, most treasured wine of the winery Aleksandrovic is a white wine Trijumf (Triumph), produced in accordance with the original blend composition from 1932. They received the original recipe for Trijumf from the royal cellar master Zivan Tadic who was the winemaker of the Karadjordjevic royal house before the World War Two. Trijumf was served at a few European royal courts at that time.