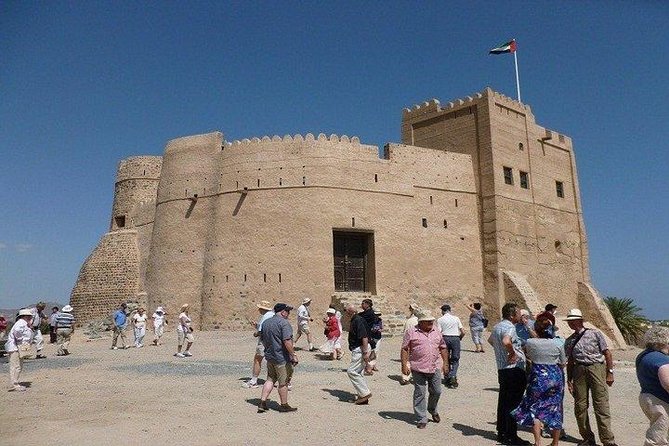 East Coast adventure full day from Dubai
Drive away from the hustle and bustle of city life to the East Coast; comprised of beaches, long stretches of road and relaxing settings that shed light on the authentic desert life experience.
Some of the attractions you will visit in this tour
Nice long drive outside the city
Pass through Dhaid to the Hajar Mountains
Stop at the local market place " Friday Market" and the Fujairah Museum
Photos at the Fujairah Fort and Badiya Mosque photo stop
Lunch followed by relaxing swim at the beach

This tour takes you through some of the fascinating attractions to be located in Fujairah, the only emirate in the UAE to be located along its eastern coast, facing the Gulf of Oman.

Discover the highlights of the East coast

Fujairah Fort:
Believed to be the oldest fort in the country, it is a site of great historical importance as it served as the home of ruling family as well as being a vital defensive building. Built in 1670 and badly damaged in the early part of the 20th century, the fort has since been restored to its former glory.

Fujairah Museum:
This museum is known for its excellent collection of artifacts dating back to the early Bronze Age that were excavated during digs at Bithnah and Qidfa. One of its standout exhibits is a 2,200-year old bowl made from an ostrich egg.
Participants also have the opportunity to do some shopping at the fruit and vegetable market and carpet market, where they can pick up fresh food and souvenirs to take home
You should know

The itinerary in points

Nice long drive outside the city

Pass through Dhaid to the Hajar Mountains

Photos at the Fujairah Fort and Badiya Mosque photo stop

Lunch followed by relaxing swim at the beach