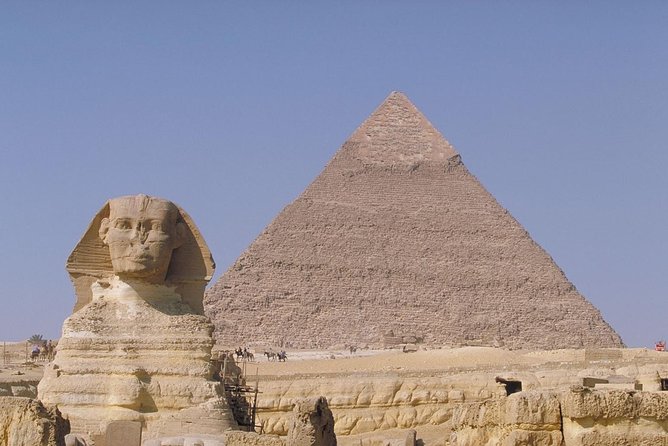 After your breakfast head towards the Giza plateau, a UNESCO-World Heritage Site and home to some Cairos most famous treasures. The first stop is at the three iconic pyramids known as Cheops, Chephren and Myrcerinus. Set on the West Bank of the River Nile these age-old pyramids are the sole survivors from the Great Wonders of the Ancient World, and are one of the planets oldest tourist attractions. Originally built as royal tombs during Egypts Old and Middle Kingdom Periods, they are riddled with a maze of passage ways designed to protect the Mummies of the Pharaohs and the treasures which they would take with them to the afterlife. There will also be an opportunity to snap a few photos with the world-famous Sphinx, an impressive 50-metre-tall statue with the body of a feline and head of a human carved out of a single piece of rock.
Later move on to the Museum of Egyptian Antiquities, which boasts an impressive collection of ancient Egyptian artefacts. Here you will discover an entire gallery dedicated to Tutankhamen and the treasures unearthed in his tomb in 1922, including the world-renowned blue and gold mask in which he was laid to rest.after that have lunch break and end your day by visiting the old Bazaar Khan El Khalili

Back to your Hotel for some rest and we will pick up you for the dinner cruise.

It is a fabulous way to enjoy a night on the Nile while you are in Cairo. So, you are invited to dinner on the Nile Maxim cruising restaurant for two hours sailing trip on the Nile with belly dancer, folklore show, Oriental music and dinner. All the time, you'll be delighted in our Chef's menu along with a selection of Egyptian favorites, made with the freshest ingredients, and prepared to make it a memorable dining experience.

Important Information
- All Pickup and Drop off in private Vehicle
-All Entry fess for the sightseing
- Camel riding included
- Get inside one of the Small Pyramids
-Professional Egyptologist
-Lunch included.
-All Services
This not includes
Tipping
Beverages