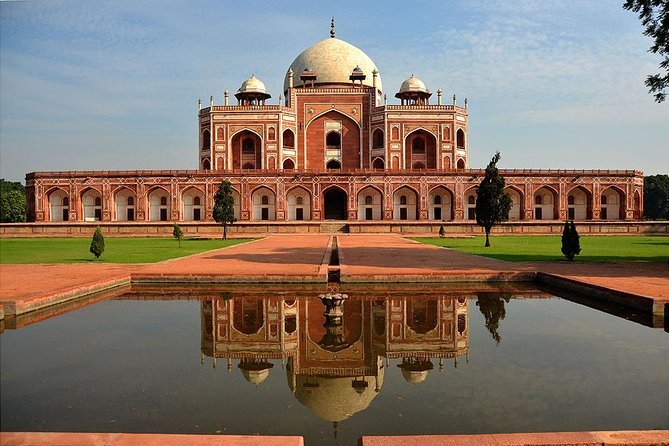 This tour is designed to especially serve those tourists who want to explore Delhi, the Capital of India. Delhi has witnessed the rise and fall of various dynasties, such as Rajputs, Sultanats, The Mughals and the British Imperialism. Experience this full day trip in an air-conditioned car, with your government-approved tour guide. Depending on the option selected, you may visit and enjoy the following: visit Humayun Tomb, the India gate, Red Fort, Jama Masjid, Chandni Chowk and Akshardham temple; enjoy lunch in multi-cuisine air conditioned restaurant and explore one of the finest flavors of Delhi; experience the Rickshaw Ride/Tuk Tuk Ride in Old Delhi.

This private tour will take you through the Old and New Delhi city tour. In one day you will get the chance to explore the Delhi city both in and out. Your tour starts at 8am from your hotel or from the Airport in the morning. On the way you will meet your tour guide who will assist in the sightseeing tour of New Delhi and Old Delhi.

Depending on the tour option chosen, your tour may include:

After the Lotus Temple visit, you will be taken for Lunch (if option chosen) in the multi-cuisine, air-conditioned restaurant and enjoy delicacies of the city.

By 5pm your tour ends and the driver will drop you back to your hotel or Airport as per your request.

NOTE: This is a suggested and recommended itinerary . May be customized as per your schedule.

May be operated by a multi-lingual guide(On Recommendation).

Wheelchair accessible, please advise at time of booking if wheelchair assistance is required.

Note: This is a suggested itinerary that completes in 8-9 hours. May be customized as per your schedule.