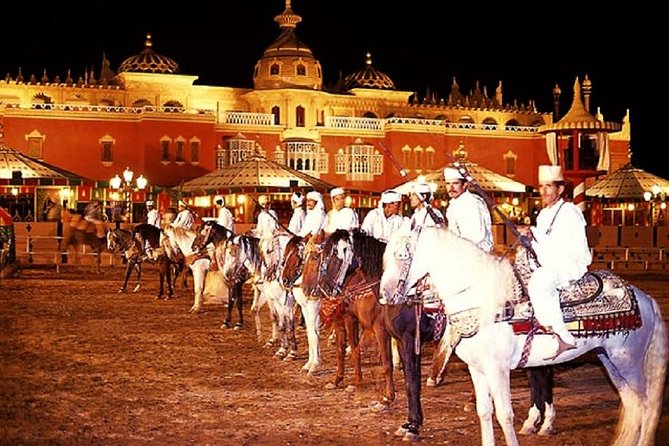 Discover all the fun and excitement of Moroccan folklore at the Fantasia Moroccan Dinner and Cultural Show.

Presented in the heart of a Marrakech palm grove, under the shelter of exotic Berber tents, the show is a dazzling, multi-colored extravaganza, accompanied by a typical Moroccan feast served in an open-air setting.

Seated on cushions encircling the show arena, you'll enjoy a traditional Moroccan meal and be serenaded by a chorus of girls and boys in traditional dress, accompanied by typical Arabian music.

After this gorgeous meal, the fabulous Fantasia show takes over the arena. The belly dancing, horseback skills and caravans are unforgettable, just like the thousand and one nights come to life!

During the show you will see a flying carpet ridden by a Sultan come out of a cloud, over the audience's head!