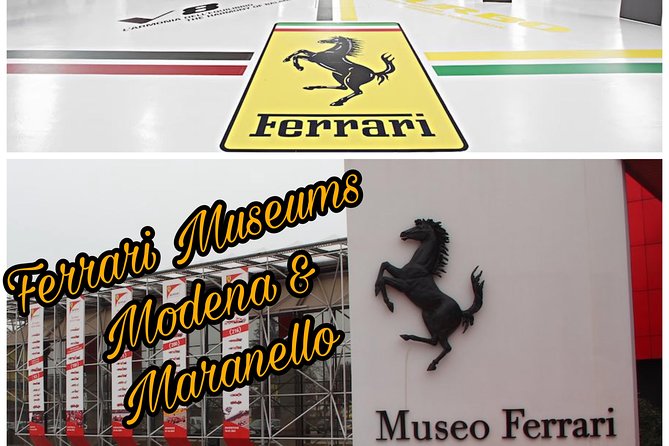 Were often asked which Ferrari museum is better? The short answer is they are both excellent and a visit to both makes for a more comprehensive experience.The Ferrari red and the Prancing Horse logoi ts the brand that defines Italian sports cars, despite its luxury neighbors Maserati and Lamborghini just down the road. Even if youre not a racing or car enthusiast, take the Ferrari tour it will give you a real appreciation for the legendary brand even if youre not a race car fan. For racing fans, a visit here is no doubt at the top of your Italy bucket list!
Ask a child to draw a car and certainly he will do it in red.
(Cit. Enzo Ferrari)

Itinerary
This is a typical itinerary for this product
Stop At: Museo Casa Enzo Ferrari, Via Paolo Ferrari 85 Parcheggio video-sorvegliato Via Giuseppe Soli, 101, 41121, Modena Italy
Ask a child to draw a car and certainly he will do it in red.
(Cit. Enzo Ferrari)
The Museum Enzo Ferrari Modena is located where Enzo Ferraris birth house used to be and where his fathers workshop still stands. Instead of the house where Enzo Ferrari grew up, theres now a futuristic looking mega hall dedicated to the history of Ferrari and different models Enzo designed. The Ferrari red and the Prancing Horse logo its the brand that defines Italian sports cars, despite its luxury neighbors Maserati and Lamborghini just down the road. Even if youre not a racing or car enthusiast, take the Ferrari tour we will give you a real appreciation for the legendary brand even if youre not a race car fan. For racing fans, a visit here is no doubt at the top of your Italy bucket list! Our tour began at the Museo Enzo Ferrari in Modena where just pulling into the parking lot is impressive. His fathers workshop and the house where he was born - parts of which are open to the public - stand in the shadow of the new modern glass museum, the design of which was inspired by bonnets (hoods) of cars built in the 50s. Walking through the doors into the museum feels like youre entering a cathedral, and Ferrari fans no doubt would agree. Here's where the history begins. To have a full appreciation of what that Prancing Horse stands for, you need a full appreciation of where Enzo Ferrari came from and his evolution from a race car driver to racing division Manager at Alfa Romeo, to a developer and builder of one of the premier marques in automobile history. And its here in the Modena museum where youll experience that. The pavilion is stunning in its design, with Ferraris on raised platforms and an enormous wraparound film screen on which a video is played every half hour that showcases Enzo's life story and the cars and moments that defined his career. Each car has a small plaque on the pedestal describing the model, year it was built and how many were built. What I also found interesting were the ones that had the name of famous people or celebrities who had bought one. One model - the Ferrari F40 built from 1987 to 1992 - had an original production plan of only 400 but eventually more than doubled that number due to preproduction orders. It was designed to celebrate Ferrari's 40th anniversary and was the last Ferrari automobile personally approved by Enzo Ferrari. If you have the money and love fine exotic automobiles, Id buy one, wouldnt you? We could have easily spent more time here lost in fantasy about putting one of these - any one - in our garage. But it was time to leave for the Maranello museum.

Duration: 2 hours
Stop At: Museo Ferrari, Via Dino Ferrari 43, 41053, Maranello Italy
Situated only a short distance from the Ferrari plant and the Fiorano circuit, the Galleria is the great museum that exhibits the history of Maranello's red cars and of their founder Enzo Ferrari. Behind learning the history of the famous company, visitors go through the stages of the development of the automobile industry, which Ferrari has contributed to increase throughout the years.
The Ferrari Gallery was inaugurated on 18 February 1990. It's a very modern and functional structure. The big parking area is animated by a red arch provided with the red and green lights which remind of the Fl Gran Prix starting line. The galleria is divided in 4 areas dedicated to: Formula 1, themed exhibitions, technological innovations and photografic shows. The tour begins at the ground floor, in the space hosting the automobiles which have raced on circuits all around the world in the past 50 years. A series of monitors displays images of the most evocative moments of the Ferrari's history; the trophies of the victories are located on a showcase. The next stage of the tour is the amphitheatre which hosts theme exhibitions (changing every 6-8 months) and 2 driving simulators set in real F1 cars.You can also see several photo murals dedicated to the great drivers who have linked their name to Ferrari and a faithful reconstruction of Enzo Ferrari's study-room which testifies his essential work that certainly contrasts with the incredible beauty of his factorys cars. At the first floor, in the area dedicated to technological innovation, are shown special vehicles (like the F50 and the 550 Barchetta), the representation of the "galleria del vento" and the exhibition of components explaining how F1 technology is applied to roading cars. There is also a line up of all Formula 1 engines employed since 1981. The tour inside the Gallery ends in the area exhibiting art and photographic shows.

Child rate applies only when shared with 2 paying adults

Wheelchair available on request. Please advise at time of booking if wheelchair assistance is required