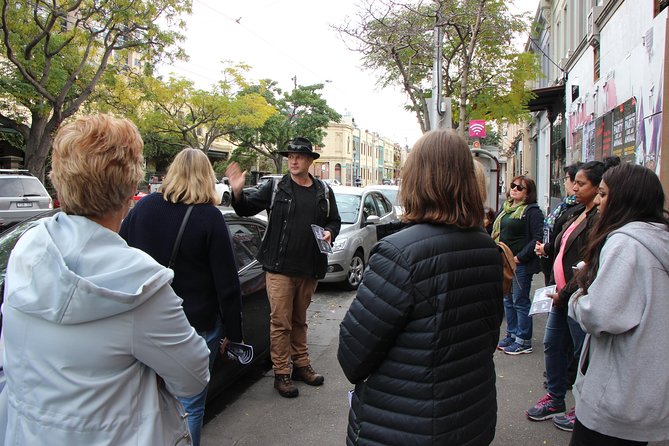 Join us on a 2 hour walking tour as we explore the streets of Fitzroy's old crime district and get to know the colourful characters who lived in Melbourne's old crime district100 years ago. The Fitzroy True Crime Walking Tour is constructed and deliveredby writer and historian Michael Shelfordand utilisesthe original police files from the era 1890-1920's.Former brothels, gangland killings, house bombing, safe cracking and shootouts with cops and are just a few of the subjects featured on the tour.
Each tour member receives a free booklet which contains photos of the characters discussed along the way.
Fitzroy is located on the fringe of Melbourne's CBD and is easily accessible by regular trams to and from the City.

The tour group meets at the historicWorkers Clubwhich is situated at the corner of Brunswick and Gertrude Streets in Fitzroy(formerly Rob Roy Hotel). We start in the front bar with an introduction and then head out to explore the streets and alleys where Melbourne's most notorious citizens of ill fame lived and plied their trade 100 years ago.
You will receive a booklet containing photographs of the people featured on the tour so that you can put a face to their adventures. Along the way you will discover former brothels, gangland murder sites, sly grog shops and the places where criminals such as Squizzy Taylor drank, fought, got hitched and faced trial. You will get to know what it was like to struggle for survival in "Melbourne's home of criminals" - old Fitzroy.
The tour winds its way back to theWorkers Clubwhere the the beer is cold and the food is good. The Workers Club has happy hour 4-7pm Tues - Fri.
Thursday twilight tours start at 6pm,
Friday afternoon tours start at 2pm
Saturday and Sunday tours start at 1pm.
All tours meet at the Workers Club Hotel in Fitzroy and go for 2 hours.
Fitzroy is located just 2 km north-east of Melbourne's Central Business District and is well serviced by regular trams too and from the City. Trams 11 and 86 stop outside The Workers Club Hotelwhere Melbourne Historical Crime Tours start and finish. Fitzroy is famous for its nightlife, street art and cuisine.

A tour booklet featuring photos of the characters discussed along the way.

Food and drink is available at the Workers Club before and after tours but is not included as part of your tour booking and needs to be purchased separately.