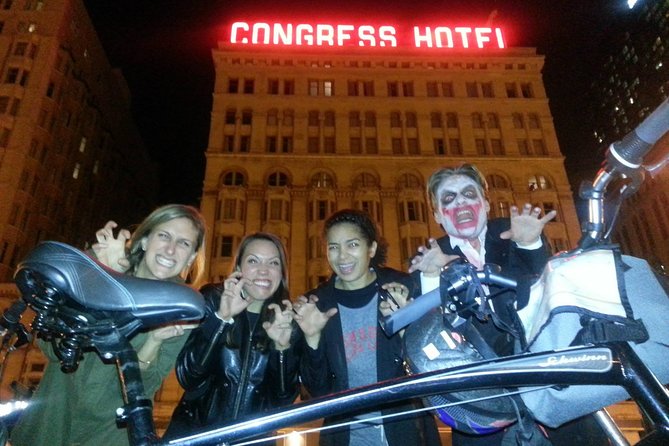 The journey begins at the Bobbys Bike Hike headquarters in Streeterville, where youll meet your terrifying and fun-loving tour guide! We will outfit you with a ready-to-ride Bobbys bicycle, complete with front and rear lights to keep the group shining bright amidst the spooky darkness. Our fleet of comfort bikes makes riding a breeze, so you can keep your focus on the frights!

The tour will then set out to see the John Hancock Center, home of the citys most prolific curses and tragic demise. Its one of the tallest buildings in Chicago and has an equally steep history of disaster.

Next, the group will cruise over to the Chicago River, site of the horrific SS Eastland shipwreck, which killed more than twice as many people as the Great Chicago Fire.

From there the guide will lead you into the Chicago Loop toward the Oriental Theatre, formerly known as the Iroquois Theatre. In 1903, a horrific blaze left hundreds trapped in the burning building and the alley beside it. It is largely believed that these souls still haunt the venue, even bringing their families to a show every now and again!

Following that, youll trek to the South Loops Congress Plaza Hotel, one of the most infamous haunted hotels in the world. Here youll take a break and maybe hunt for a ghost or two in the lobby. Bobby advises against venturing upstairsmultiple rooms have been sealed off for a reason.

Later, the frightening ride continues down to Grant Park and Museum Campus, two of Chicagos most iconic waterfront parks. These centuries-old spaces are vast and haunting, the perfect place to share more ghost stories including those of H.H. Holmes, a serial killer who preyed upon visitors to Chicagos 1893 Worlds Fair. Though his south-side murder castle has long been demolished, the spirits of his victims are still present all around.

The tour finishes with a lakeside ride back to Streeterville, passing the dark depths of Lake Michigan, home to countless deadly shipwrecks, as well as the bright facade of Navy Pier, which long stood abandoned after the Second World War, a perfect place for paranormal activity.

The tour concludes back at the Bobbys Bike Hike headquarters after three hours and countless frights! At this point, youll know why Bobbys is Chicagos favorite company for nighttime bicycle tours!

This tour is appropriate for most ages and fitness levels. Professional guides blend quality information, group interaction, and most of all, fun, to create an unforgettable Chicago experience. Bikes are provided. Child bikes, seats and tag-alongs are available.

Please note: children must be strong, capable riders and be able to bike for 9 miles