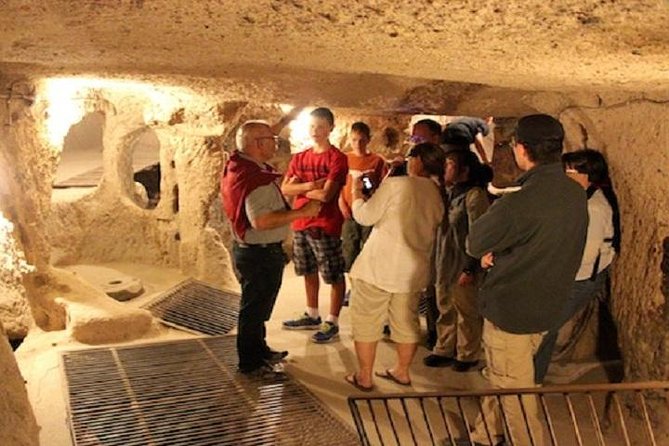 Kaymakli underground city is built under the hill known as the Citadel of Kaymakli and was opened to visitors in 1964. The people of Kaymakli (Enegup in Greek) village have constructed their houses around nearly one hundred tunnels of the underground city. The inhabitants of the region still use the most convenient places in the tunnels as cellars, storage areas and stables, which they access through their courtyards. The Kaymakli Underground City has low, narrow and sloping passages. While the underground city consists of 8 floors below ground, only 4 of them are open to the public today, in which the spaces are organized around ventilation shafts.

Pick-up from your hotel in Cappadocia at 09:45am

Tour to Kaymakl Underground City, one of the most interesting underground settlements in Cappadocia. Drive to to Sahinefendi (Sobesos) - Sobessos is newly discovered (01 May 2002) mosaic houses & Archaeological excavation site.

Villages in the valleys, surrounded by the table top mountains, are spectacular. Continue with Keslik Monastery near Cemil, that hides its frescoes behind a very thin smoke layer which we can only see by torch light.

Visit to Mustafapaa (Sinasos), an old Greek town with its spectacular old Greek houses; very fine examples of late Greek settlements and architecture. Visit to Saruhan Caravanserai, a roadside inn where travellers could rest and recover from the days journey. Caravanserais supported the flow of commerce, information and people across a network of trade routes of Asia, North Africa and South-Eastern Europe on the legendary Silk Road and the Spice road.

Continue with panorama of the Red Valley, with its fabulous volcanic rock formations, is in the heart of Cappadocia but away from the tourist crowd.

Return to your hotel at around 4:30pm.