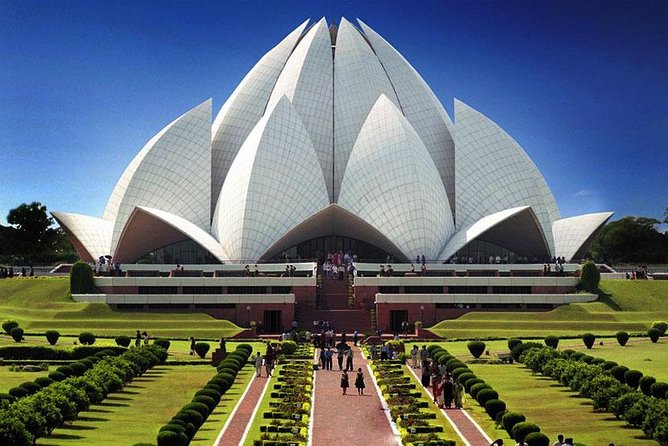 Explore Old Delhi and New Delhi and discover their peculiarities. Join this full-day, 7-hour sightseeing tour with a local guide and travel comfortably between the historic sites in an air-conditioned vehicle. Enjoy a delicious traditional lunch in between your sightseeing adventure.

Meet your guide in the lobby of your Delhi accommodations to start the tour. From there, head to the Raj ghat, a memorial dedicated to Mahatma Gandhi. After touring the memorial, drive past Red fort, a red sandstone architectural wonder. Next, visit India gate, a memorial to the Indian World War I soldiers. Then, drive past the Rashtrapati Bhawan and the Parliament house. Also, the visit 12th century Qutab Minar, gracefully hand-carved for its entire height of 234ft, and the iron pillar, which has withstood the ravages of time and not rusted even after 1500 year.

Later, visit Akshardham or Swaminarayan akshardham, a complex that displays a millennia of traditional Indian and Hindu culture, spirituality, and architecture. The building was inspired and moderated by Pramukh Swami Maharaj the spiritual head of the Bochasanwasi Shri Akshar Purushottam Swaminarayan Sanstha, whose 3,000 volunteers helped 7,000 artisans construct Akshardham. Once you have finished your visit, the guide will bring you back to your accommodations.

Vegetarian option is available for lunch, please advise at time of booking if required

Not recommended for child aged 1 and under