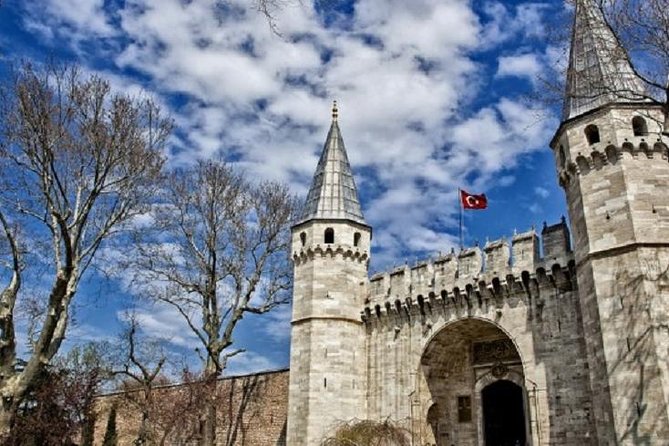 The group tour starts with the visit to Saint - Sophia Church (Church Of The Holy Wisdom): Built in 537 by Byzantine Emperor Justinianus, St. Sophia has been the largest cathedral in the world for nearly a thousand years; it is considered the masterpiece of Byzantine architecture; after having been the Patriarchal basilica of Constantinople, it was covered into a mosque in 1453 by Sultan Mehmet II. the Conqueror and into a museum by Ataturk in 1935. Mosque Of Sultanahmet (Blue mosque): Built in 1609, it is - with its 6 minarets facing Ayasofya- the last great imperial mosque of the classical period; its name comes from the 20.000 marvellous blue-toned Iznik tiles decorating the interior walls. Hippodrome: It was a horse-racing track and also the sporting and social centre of the Byzantine Empire; the German fountain, the Obelisk of Emperor Theodosius and the bronze Serpentine Column are the monuments embellishing the Hippodrome. Topkapi palace: This extraordinary and secret palace was the residence of the Ottoman Sultans and the center of Ottoman might for nearly 400 years. The buildings are a typical example of Ottoman architecture and the rooms exhibit rich collections of porcelains, robes, weapons, shields, armors, Ottoman miniatures, Islamic calligraphic manuscripts as well as Ottoman treasures and jewellery. Grand bazaar: The largest covered market in the world with more than 60 streets and 4,000 shops, where you may find in an authentic oriental atmosphere all kind of gifts, antiques, jewellery, hand-woven fabrics etc... Closed: Monday: St. Sophia, Turkish & Islamic Arts Museum Tuesday: Topkapi Palace, Sunday: Grand bazaar

Pick up from Old City Hotels

Pick up from Taksim or other parts of Istanbul