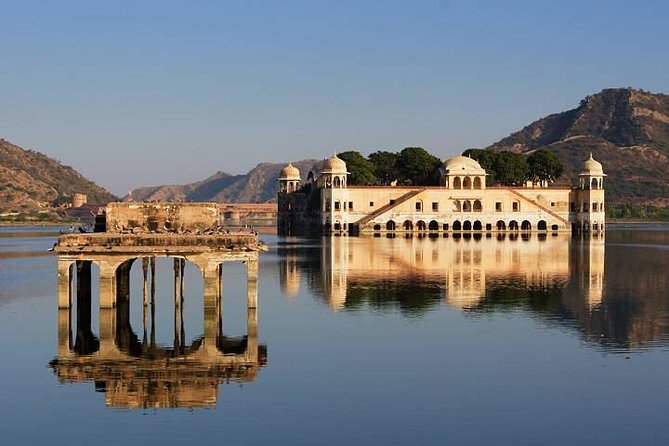 You will be picked up from your hotel at 8am and start the excursion by visiting Amber Fort, the ancient capital of the state. Perched on a hill some 11km from Jaipur, and nestling among the Aravalli Hills, is the historic fort-palace of Amber. Set in a picturesque background, the splendid Amber Fort was built in 1600 by Raja Man Singh, commander-in-chief of the Mughal army during Akbar's reign and certainly one the greatest general of medieval India. The fort also made the headlines after Independence when it was supposed to be the most likely hiding place of the Kuchwahas' famous lost treasure.

Next, you will be stopping for a few minutes for photography at Jal mahal and continue to City palace, Jantar mantar (observatory), Albert hall museum and Ram Niwas Gardens in the afternoon. You will drive past Hawa mahal (the Palace of Winds) and through the pink rose residential/business areas of Jaipur. City palace is a fine blend of Rajasthani and Mughal architecture. One of the most important architectural landmarks in Jaipur, this palace complex has numerous buildings, courtyards, impressive gateways and temples. The palace houses Sawai Jai Singh's 7-story facade Chandra Mahal (Moon Palace), solid marble Mubarak Mahal, the Diwan-e-Aam and Diwan-e-Khas (the Hall of Private Audience). Chandra Mahal is still the residence of the present royal family.

Hawa mahal-Arguably Jaipur's most acclaimed landmark, which was built in 1799 to enable the ladies of the royal household to watch street processions while remaining in a strict state of purdah. Its 5-story facade, decked with no less than 593 finely screened windows and balconies, makes the building seem far larger than it really is; in fact it is little more than one room thick in most parts. Though the primary source of its appeal is undoubtedly the fantastic honeycomb pink and white face, visitors can go inside by entering from the back to see exactly where the women sat, and take a close look at the detailed stonework. Once the tour is concluded, you will be transferred back to your hotel.

Hotel pickup and drop-off in Jaipur