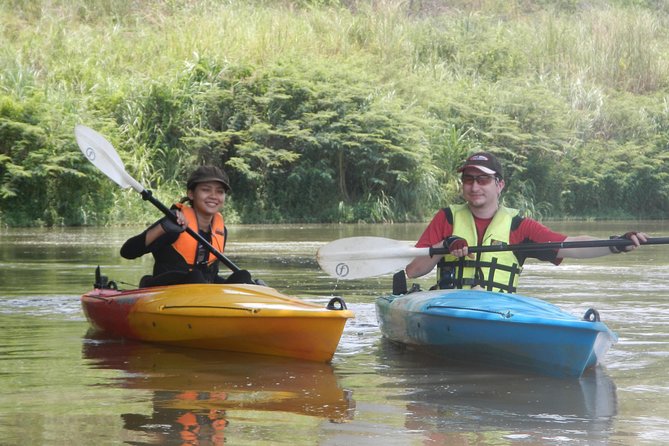 Go river kayaking through the Mae Ngat Valley and into the Mae Taeng Forest Reserve whileaccompanied by a guide. You'll seeample birdlife, water buffaloes, and local fishermen inthis tranquil setting. Quality sit-in, single kayaks are provided, with double kayaks available on request. Suitable for beginners, this full-day excursion from Chiang mai includes paddlinginstructions and is available in all seasons.

ThisMae Ngat Valley river trip start with hotel pickup from your Chiang mai hotel in the morning. On arrival at the launch site on theMae Ping river, get paddling instructions from your guide in your single or double kayak. After some practice it'saneasy entry at the dam flow. The river terrain gets a bit more challengingas you navigate between the sand banks and shore, butnewcomersto the sport will find the vessels very stable.

The cool water keeps the immediate environment at a comfortable temperature and theabsence of modern civilization provides a tranquil setting.Get a glimpse ofrural life you'll spot the occasional fisherman casting a netinto the Mae Ping or a farmer herding water buffaloes and watch for native and migrating birds that thrive in this protected region.

Pause for lunch on the riverbank, then kayak to yourfinal destination in the Mae Tang Forest Reserve where a canopy ofoverhanging trees offers shade.Afterward, you're driven back to your hotel in Chiang mai.

Sit-on-top kayaks with back rests are available for children

Please bring an extra set of dry clothes, sunscreen and a cap