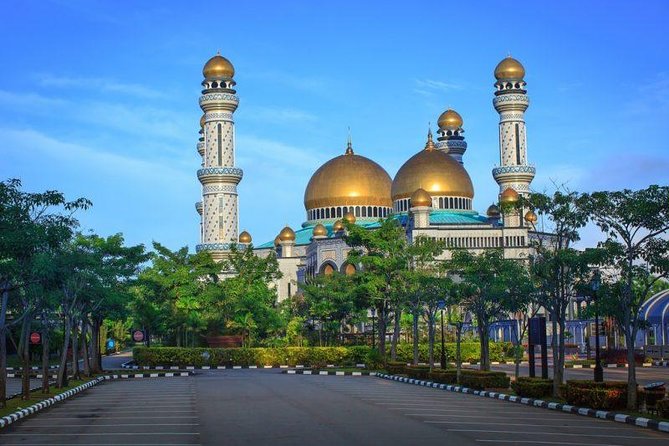 If you are taking a cruise or a short business visiting in Brunei. This one day private tour will help you save money and time most, which provide you the land transfer and city tour together and help you understand Brunei in short time.

Itinerary
This is a typical itinerary for this product
Stop At: Jame'Asr Hassanil Bolkiah Mosque, Sultan Hassanal Bolkiah Highway or Jalan Jame Asr, Bandar Seri Begawan Brunei Darussalam
is adorned with 29 golden domes and four minarets, the most magnificent modern architecture to commemorate the 25th anniversary of His majestys reign.
Duration: 40 minutes
Stop At: Royal Regalia Museum, Jalan Sultan Omar Ali Saifuddien, Bandar Seri Begawan BS8811 Brunei Darussalam
Find a vast collection of discarded relics and monuments to the current Sultan of Brunei, His Majesty Paduka Seri Baginda Sultan Haji Hassanal Bolkiah Muizzaddin Waddaulah, Sultan dan Yang Di-Pertuan Negara Brunei Darussalam. The building is more than a museum - the exhibits illustrate the important upbringing, education, marriage, travels, coronation and subsequent rule of the current Bruneian head of state.
Duration: 30 minutes
Stop At: Brunei Darussalam Maritime Museum, Jalan Sultan Sharif Ali Simpang 482, via Jalan Kota Batu, Bandar Seri Begawan BS8811 Brunei Darussalam
Items exhibited in the well-presented shipwreck gallery include ceramics and glassware from China, Vietnam and Thailand, which would have been brought to Brunei to exchange for local products including spices, rattan, sago and camphor.
Duration: 40 minutes
Stop At: Malay Technology Museum, Jalan Doto, Bandar Seri Begawan BS8411 Brunei Darussalam
Take a look at the architectural details of stilt houses (as seen in Kampong Ayer) dating from late 19th to mid 20th centuries. You can also delve into some of Brunei's most famous handicrafts, like kain tenunan, their prized art of brocade-weaving, as well as gold-and-silver-smithing, brass-casting and more.
Duration: 40 minutes
Stop At: Brunei-Muara District, Brunei-Muara District
Kampong Ayer is a cluster of around 40 small villages connected by a 38-kilometer (23-mile) boardwalk. It is the worlds largest settlement on stilts. Experience a short water taxi ride to visit a local host where you can enjoy refreshments and observe their culture & lifestyle.
Duration: 2 hours
Stop At: Sultan Omar Ali Saifuddin Mosque, Jalan Mc Arthur, Bandar Seri Begawan BS8711 Brunei Darussalam
is an exclamation point above the Brunei River, completed in 1958 and is an impressive example of Islamic architecture. It is built on an artificial lagoon on the bank of the river by the 28th Sultan of Brunei.
Duration: 30 minutes