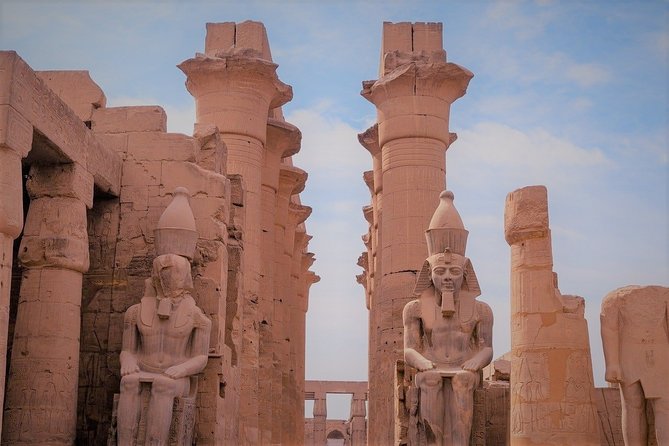 Half Day Luxor East Bank Tour Visit the Temples of Karnak & Luxor in 5 hours with a private guide.
Luxor is considered the biggest Outdoor Museum in the World with its treasures temples, tombs, and museums. In this Half day tour in Luxor, you will visit the temple of Karnak and Luxor the largest archaeological sites in Egypt after the great Pyramids of Giza.
Karnak is an ancient Egyptian temple precinct located on the east bank of the Nile River in Luxor It covers more than 100 hectares, an area larger than some ancient cities.
The central sector of the site, which takes up the largest amount of space, is dedicated to God Amun-Ra, associated with Thebes. The area immediately around his main sanctuary was known in antiquity as Ipet-Sun which means the most select of places, the construction of the Karnak temple lasted about 2000 years to be built from the old kingdom till Roman-occupied Egypt, the temple has the biggest Hypostyle hall in the world.

We pick you up from your hotel in Luxor by our modern air-conditioned vehicle in a guided tour to Luxor East Bank. The City of Luxor is the greatest archeological city in the world. It considered as the biggest open air Museum in the world as it combines the largest number of monuments. In that tour you will visit the following sights with your Egyptology expert tour guide:

It is the largest temple complex ever built by man, and represents the combined achievement of many generations of ancient Egyptian builders. The Temple of Karnak is actually three main temples, smaller enclosed temples, and several outer temples located about three kilometers north of Luxor. Karnak is actually the sites modern name. Its ancient name was Ipet-isut, meaning The Most sacred of Places. The three main temples of Mut, Montu and Amun are enclosed by enormous brick walls. The Open Air Museum is located to the north of the first courtyard, across from the Sacred Lake. Actually, there are a number of smaller temples and chapels spread about Karnak, such as the Temple of Osiris Hek-Djet, which is actually inside the enclosure wall of the Temple of Amun. Then continue to Luxor temple

The temple of Luxor is close to the Nile and parallel with the riverbank. King Amenhotep III who ruled 1390-53 BC built this beautiful temple and dedicated it to Amon-Re, king of the gods, his consort Mut, and their son Khons. Obelisk of Rameses II This temple has been in almost continuous use as a place of worship right up to the present day. It was completed by Tutankhamun and Horemheb and added to by Ramses II. Towards the rear is a granite shrine dedicated to Alexander the Great. During the Christian era the temples hypostyle hall was converted into a Christian church, and the remains of another Coptic church can be seen to the west. Then for thousands of years, the temple was buried beneath the streets and houses of the town of Luxor. Then After finish your Tour transfer you back to your Hotel and that is the end of our Services.

Pick up services from your hotel in Luxor and return

All transfers by Air-conditioned non-smoking coach or mini-bus

Entrance fees to the mentioned sights of Karnak and Luxor Temples

A bottle of mineral water per Tour

All service charges and taxes