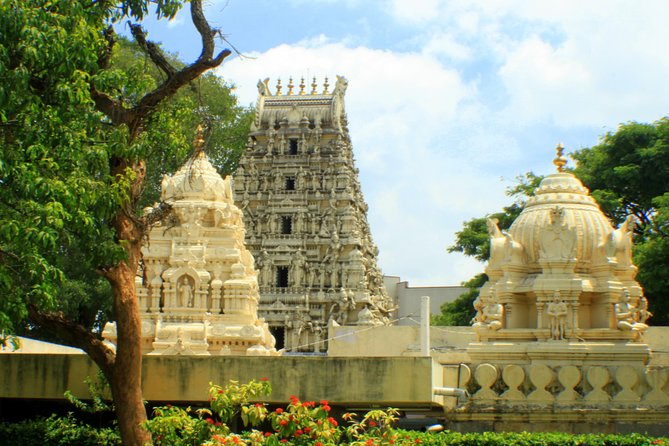 Start your amazing temple tour of Bangalore after meeting your Private local guide and Personal chauffeur at your hotel lobby.

Drive toBasavanagudi to visit famous Bull temple.This is the biggest temple of Nandi in the world measuring 15ft in in height and 20 feet in length. The actual temple is small consisting only of the shrine.The temple was built in the year 1537 by the local ruler of the erstwhile Vijayanagara Empire. The granite structure of the statue of Nandi is cut out of a single piece of rock.

Walk down toDodda Ganesha temple.The huge Ganesha of this popular temple is 18 ft tall in height and 16 ft wide. The lord is also generally known as Shakthi Ganapathi or Satya Ganapthi. It is usually believed that the idol of Dodda Ganesha Temple at Basavanagudi is growing on its right side.

Drive to Gavi Gangadareshwara Temple.This Cave Temple is an example of Indian rock-cut architecture. This 9thcentury temple is cut out of a single rock and is also famous for its stone discs in the forecourt. The front of the temple is adorned by a sculptor of Nandi.The temple also has a rare sculpture of the fire god Agni, with his two heads, seven hands and three legs. This temple sees the largest crowd on the festival of Shivaratri. Devotees gather here on Makara Sankaranti day when it is believed that at a particular moment in the evening the suns rays fall directly on the Shivalinga inside the cave.

Venkataramanswamy Templewas built over 300 years ago and is home to some very interesting and intricate carvings. Though it is a relatively small temple the lion brackets and carvings of human and animal figures make it a unique example of Dravidian civilization.The figures of the Gods Brahma, Vishnu and Shiva adorn the walls.

Drive toISKON temple.Sri Radha Krishna Chandra orISKON temple is situated at Hare Krishna Hill. This Neo-Classical temple is attached to a cultural complex occupying a seven acre hillock.It is one of the largestISKCONtemples in the world.

Try some vegetarian lunch (at your own cost) at one of the cafeterias within temple complex.

VisitArt of Living International Centre,Situated on the top of the Panchagiri Hills, 24km southwest of Bangalore, near Udipalya village. The campus is spread over 65 acres, with an abundance of flowering foliage spread along winding footpaths, a peaceful lake and the exquisitely beautiful Vishalakshi Mantap, the central meditation hall.Started in 1986, the ashram is an exquisite blend of the old and the new. Feel free to attend some of meditation sessions (most times free) or jump on to the Ashram bus tour (1:30 hour tour for free) if seats are available.

Return back to the hotel with wonderful memories.