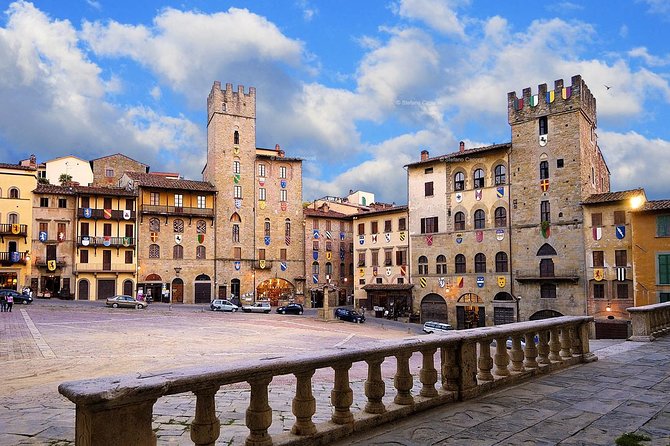 Take a full-day private guided tour of the Tuscan countryside departing from Siena. Visit Arezzo, a thriving town famous throughout the world for the works of Piero della Francesca and Cimabue, and the ancient city of Cortona for a chance to travel back in time. This small-group tour also includes lunch and wine tasting at a local winery.

Depart from your Siena hotel and take a scenic 1-hour drive through the hills of Crete Senesi. Reach Arezzo, a city of ancient Etruscan origins, known for the great antiquarian tradition. Walk among places that have been the backdrop of the Oscar-winning film "Life is Beautiful" by Roberto Benigni, such as St. Francis. In the basilica are preserved frescoes of Piero della Francesca.

Explore Piazza Grande, the most noteworthy medieval square in the city. Filled with antique shops and boutiques, Piazza Grande is also home to the most famous and oldest Antique Fair which is traditionally held the first weekend of each month. Finally, visit the Cathedral, Town Hall and the Medieval church of San Domenico, in which there is the crucifix of Cimabue. Stop at a traditional restaurant in the old city to enjoy a typical Italian lunch.

Take a 30-minute drive through the picturesque Val di Chiana to reach the ancient Etruscan city of Cortona which dominates the entire valley. The first stop will be dedicated to the Sanctuary of Santa Margherita, located on the highest point of the city where you can enjoy a breathtaking view. Continue down towards the city center and visit the picturesque Eremo delle Celle, built by St. Francis in the thirteenth century on the rock overlooking a creek. In the main square, see the Town Hall of the thirteenth century with its tower and clock.

Visit the Tenuta La Braccesca Antonori, located a few miles from Montepulciano on the border between Tuscany and Umbria. The lands of La Braccesca are two areas which are very close but very different. Montepulciano is a classic and prestigious land of "Vino Nobile" which is produced in the vineyards surrounding the town of Montepulciano. Cortona is known for its variety of quality wines made from a variety of international and local grapes. These two "souls" embody the style of La Braccesca, which has respect for tradition and constant research and represents harmony between old and new. The tour includes a guided visit of a local winery followed by a tasting of 3 wines. At the end of your memorable day, return to Siena for drop-off at your hotel.

In the absence of availability at Tenuta La Braccesca Antonori, the visit and tasting will be conducted at the winery Nobile di Montepulciano.

Note that the driver will give historical information as you travel but cannot legally guide a city or monument tour; if you would like a licensed guide, make a note in the 'Special Requirements' box when you book and the local operator will contact you with supplement details