Full-Day Private Tour To Fez From Casablanca - With Reviews & Ratings 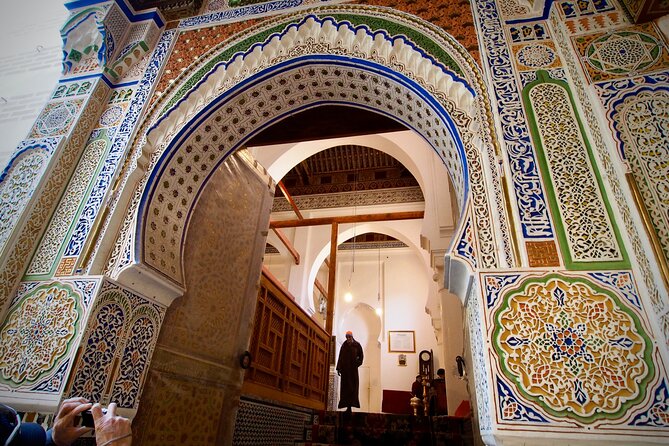 Founded in the year 790 by Moulay Idriss, Fez is the most religious, intellectual and artistic capital of the Moroccan metropolises and the cradle of the millennial monarchy. During a long period, Fez was the capital of the Cherifian Empire and, for years, has preserved both its historic place of learning and its role as an intact Islamic city. The citys elaborate network of narrow streets and passageways will prove an adventure to navigate, while simultaneously experiencing a sensory awakening: the bustle, sounds and voices; the delicate aroma of oriental perfumes or the scent of tanned hides; the barbecues and the confectionery shopsall in one place, the Imperial City of Fez!

Departure at 7am from your hotel in Casablanca on a private and comfortable vehicle, with your driver-guide.
Visit of Fez el-Bali through the grand Bab Boujloud door that takes you up to the two main streets: Tala Kebira "the great rise", the largest and Tala Sghira "small rise". Both lead to the heart of the medina. Visit the BouInania Madrasa and enchanting Nejjarine fountain, the oldest fountain of Fes, hidden in the maze of narrow streets of the old town and outside the Karaouine mosque. This has played a unique role in Islamic history, its adjacent university has become one of the leading spiritual and educational centers of the Muslim world. Visit the Bab Boujloud which includes a beautiful esplanade on which annually the free concerts of the Fes Festival of World Sacred Music take place. Visit the Foundouk Nejjarine which houses the Museum of Arts and Crafts Wood: You will be amazed by the tea room of the museum panorama of the rooftops of Fez. Visit the souks of Fez: On along the wadi Fez, souks home to master artisans in aesthetics. You can enter for your viewing pleasure in one of these foundouks (artisan workshop). Also visit the souk henna on a pretty square. After a break, visit the Tombs Merinides: the hill, the view of Fez and the Sebou Valley is breathtaking. Back to Casablanca to 6pm

Hotel pickup and drop-off (if required)

Transport by air-conditioned car, minivan or coach (depending on group size)

Please note: the Kairaouine Mosque is closed to non-Muslims and so the visit will be to see the outside only

On Fridays, many monuments in Fez are closed