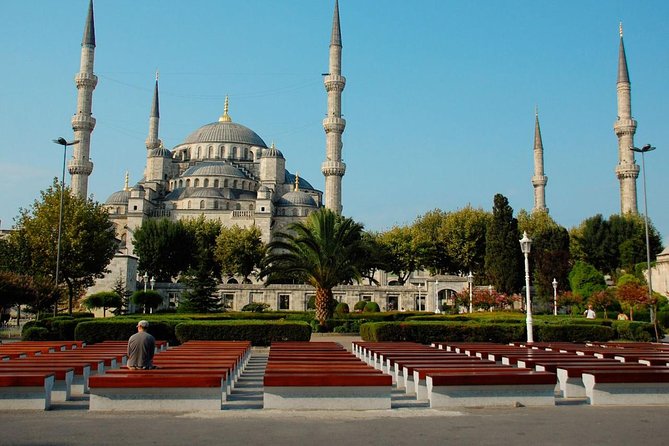 Get to the heart of old Constantinople with this private 1-day walking tour of Istanbul's old city, Sultanahmet. Visit the Roman-era Hippodrome, the iconic Blue mosque, Topkapi Serayi, home of the Ottoman sultans, and the stunning Hagia sophia cathedral-mosque before haggling for souvenirs at the Grand bazaar.Most people spend 8 hours or less on this tour.

Your driver will collect you from your hotel around 8-8:30am to transfer you to Sultanahmet, the beating heart of historic Istanbul, where your guided walking tour begins. You'll start in Roman times, at the ruins of the Hippodrome, an epicenter for sporting and political activities for both Byzantium and Constantinople: see an Egyptian obelisk, the Serpent column from Delphi, and the German fountain, constructed in honor of Wilhelm II.

Next, it's a short stroll to The blue mosque, an icon of Istanbul's skyline and one of its largest mosques, with gorgeous bluework tiles and six slender minarets. From here, wander up to the Topkapi Serayi, the great palace of the Ottoman emperors that's now quite beautifully restored. You'll explore its expansive gardens, array of chambers and pavilions, and museums, including the treasury of the imperial family.

Step back in time again to the magnificent Hagia sophia with its soaring dome and glittering gold. Built as a cathedral in Byzantine times, it was converted to a mosque during the Ottoman era. Finally, you'll walk a little under a mile (1.3 kilometers) to Istanbul's historic Grand bazaar, where the gorgeous array of perfumes, handicrafts, carpets, and metalwork will tempt even convinced non-shoppers.

How long you spend on this tour is really up to you. Most guestsend their tour in Sultanahmet square around 5pm, in time for an early dinner at one of the area'smanyTurkish restaurants.