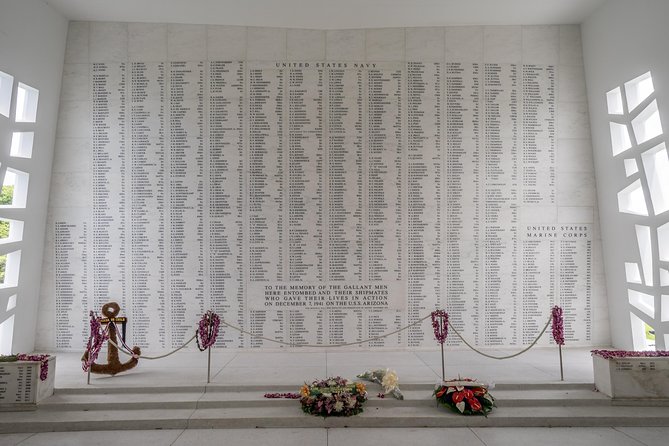 You can cross four Pearl Harbor attractions off your list with this all-inclusive visit, round-trip by air from Kauai. Look forward to a day exploring the Uss arizona memorial Hawaii's number of attraction and the USS Bowfin submarine, Uss missouri battleship, and the Pacific Aviation Museum, with skip-the-line admission to the Uss arizona memorial. Airfare and transfers from Honolulu International airport to Pearl Harbor and back to airport are all included.included.

Fly out of the inter-island terminal on Kauai and be greeted by a representative on arrival in Honolulu. After a transfer to Pearl Harbor and a brief orientation, youre taken to the Road to War museums and the Pearl Harbor Visitor Center to watch actual film footage of the 1941 Japanese attack on Pearl Harbor.

Once you're transferred by boat to the USS Arizona Memorial, youll skip the hassle of waiting in line. Simply use your priority admission for fast-track entry and explore this top Hawaii destination at your own pace.

Use another pass to transfer to Ford Island for a look at the USS Missouri battleship. You have the option to either use an audio set for a self-guided tour or take a tour with a live guide on-site for 30 minutes. Next, visit the USS Oklahoma Memorial and explore the USS Bowfin submarine during an audio tour of the submarine, followed by a visit tothe Pacific Aviation Museum.

Departing Pearl Harbor, conclude with a brief Honolulu city tour before heading back to the airport, if time permits. Your driver points out historical landmarks such as the King kamehameha statue, Iolani palace, State Capital, Washington place, and the First Church. From the inter-island terminal, you'll board your plane for the return flight to Kauai.

A light breakfast (Tropical juice + fresh muffin) for client landing before 8:00 am

Boat ride to and from USS Arizona Memorial and back

Pass for transfer to Ford Island

An audio set for USS Missouri Battleship or you can have a live tour guide for 30 minutes as part of small group.

AN audio set for the USS Bowfin

A complimentary audio set for the USS Bowfin Submarine Museum

An audio set for the Pacific Aviation Museum

Flight times to Honolulu from the outer islands may be vary depend on airline availability.

Flight times for your return may be vary depend on airline availability.

Please ensure to allow at least 1.5 hour prior to your scheduled departure to check in for your flights

Note: The US Navy has the right to shut down the boat at anytime due to public safety concerns, at which time there are no refunds, but the rest of the tour will continue.

NO BAGS ARE ALLOWED IN PEARL HARBOR,from any size, any color, any brand and for any reason after September 11. 2001. BAGGAGE CHECK IS AVAILABLE FOR A FEE UPON ENTRY TO VISITORS CENTER. We strongly recommend not to bring any kind of bag with you as you may end up stay in a long line to check in your bag and possibly lose portion of your time. Please be advise clients can not leave their belongings in our vehicles.