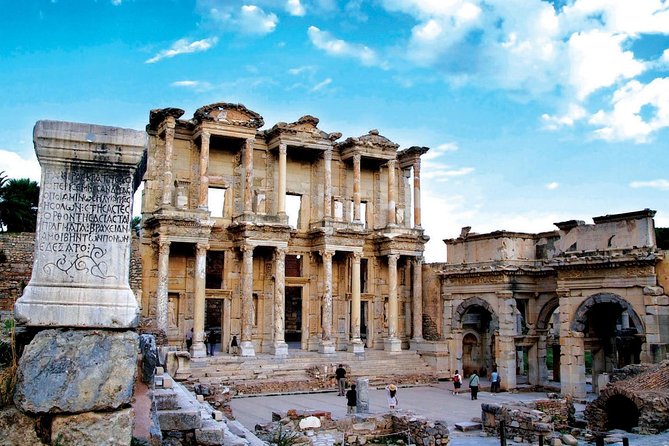 Ephesus is one of the best preserved ancient sites in the world, but planning a visit to the famous ruins takes serious planning. During this hassle-free, all-inclusive day trip, you can settle back and relax while someone else handles the logistics. Explore the ancient ruins and religious sites of Ephesus on a full-day, small group tour with lunch and an experienced guide. Follow the trail of the Virgin Mary to her mountainside house, then trace a route through the ancient citys ruins, temples, theatre and the great Celsus Library.

As a family based & educated (5 years of University education for Tourism Industry and 15 years of Experience in Tourism Industry) licensed Travel Agency we do our job with love and we try to do our best to represent our Country.

We offer you;
100 % Satisfaction
Exploring Local Life not the Touristic Designed Things

Itinerary
This is a typical itinerary for this product
Pass By: Izmir, Izmir, Izmir Province, Turkish Aegean Coast
We start picking up our guest from the Hotels/Izmir Airport at around 08:00 - 08:30 am. Then start driving to Selcuk Town where we will spend our whole day with visiting the destinations.
Stop At: Meryemana (The Virgin Mary's House), Selcuk 35100 Turkey
It is known that the Virgin Mary came to Ephesus and lived here for some time. Whether or not she died in Ephesus was not known until Anne Catherine Emmerichs vision. The stigmatized German nun who had never been to Ephesus had a vision of the House of the Virgin Mary and described it in detail to the German writer Clemens Brentano who later published a book about it. Catherine Emmerich died in 1884. In 1891 Paul, Superior of the Lazarists from Izmir read about her vision and found a little building which corresponded with Emmerichs descriptions. Archeological evidence showed that the little house was from the 6C AD but that the foundations were from the 1C AD.
Duration: 1 hour
Stop At: Ancient City of Ephesus, Selcuk 35920 Turkey
Ephesus Ruins is the largest open-air museum of Turkey which is dated to the Greek and Roman periods. Inside the Ruins of Ephesus, we explore Senate Building, Ancient Hospital, Domitian Temple, Nike Statue, Hercules Gate, Trajan Fountain, Hadrian Temple, Celsus Library, Grand Theatre of Ephesus and many more...
Duration: 2 hours
Stop At: The Temple of Artemis, Ataturk, Park Ici Yolu No:12, Selcuk Turkey
Artemis was the Greek goddess, the virginal huntress and twin of Apollo, who replaced the Titan Selene as Goddess of the Moon.
The ancient temple was built around 650 BC to the cult of Artemis, was constructed on a site already sacred to the Anatolian Mother Goddess, Cybele. The temple was financed by the wealthy king of Lydia and the marshy ground was selected for the building site as a precaution against future earthquakes.
Duration: 20 minutes
Pass By: Izmir, Izmir, Izmir Province, Turkish Aegean Coast
During the tour, you will have a chance to explore local handicrafts and at the end of the tour around 17:00 - 18:00, you will be returned to your pick up location.

Pick up and Drop off services available from the Hotels which is located in the center of Izmir City or the Hotels located around Izmir Airport. While booking this package, please indicate your Hotel details. The travelers who stay out of the pick-up & drop off zone may handle their own transportation to the meeting place.

For the travelers who will join from Izmir Airport, arrival time should be the latest 08:30 am.