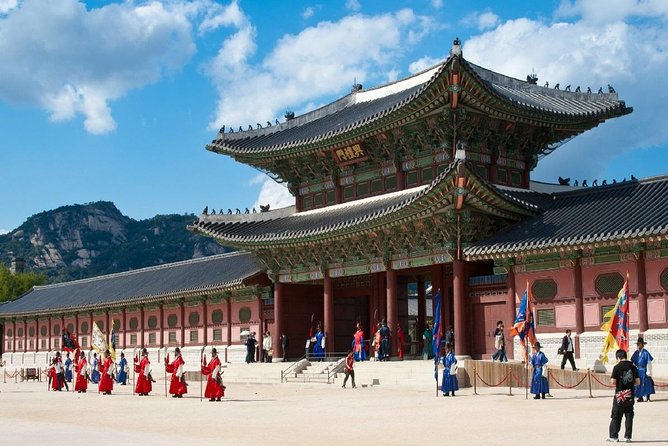 This small group journey will start with Jogyesa, the center ofBuddhism in Seoul where you can see locust trees and baeksong trees in front of Jogyesa temple.Afterward, you will move to the presidential blue house that symbol of Cheongwadae with blue tiles and theGwanghwamun Gate to see royal guard changing ceremony. After watching the ceremony, you can explore Gyeongbokgung palace.Then you will see theNational Folk Museum where you cansee how people lived a few centuries ago,theChangdeokgung Palace that listed as a UNESCO World Cultural Heritage andInsadong, a famous antique alley that is popular with antique shops, handmade crafts. Finally after a long day, you will seeNamdaemun, the main gate of a Seoul. This is a full day packed with a lot of information on Seoul and the Korean traditions.

From your hotel, you will start your travel in a comfortable vehicle. Youll arrive at the Jogyesa temple, a quiet and calm place, located in Jongno. The irony is that the temple located in a very crowded street, but inside the temple is serene and beautiful.

Next, you will have the chance to visit the presidential blue house is known by the symbolic blue tiles. The building shows the true beauty of Korea with Mt Bukak peeking behind it.

Then, you will move onto the next place called Gwanghwamun to watch the royal guard changing ceremony.It is a ceremony to announce changing of the royal guards, as well as to clarify the guards' identities.

Then, you will head toward Gyeongbokgung called the northern palace. It was a main palace and the most beautiful palace during the Joseon dynasty.After seeing the Gyeongbokgung palace, you will visit the Korean Ginseng Center to look around before having a lunch of local food and move on to the Changdeokgung palace.

The Changdeokgung palace is listed as a UNESCO World Cultural Heritage since 1997 for its beautiful appearance. It is a residence for the kings and queens with rear garden pavilion.

After seeing how the royals lived, you will move onward to Insadong to see and experience the traditional culture of Korea like a Korean tea house and maybe try buying something in this famous antique alley.Then, you can visit the Korean Amethyst shop or the Korean Cosmetic duty-free shop for some free time shopping.

For the last part of the tour, you will move to Namdaemun (also known as Soongryemun) whichwas built in 1396 by King Taejos reign. Now, Namdaemun is listed as Korea's most important National Treasure. You will also visit Namdaemun market near Namdaemun and look around this famous traditional market.

After your long day, thetour will conclude at your hotel where you were picked up in the morning.

On Mondays, Changdeokgung Palace is closed, and you will go to Namsan Korean traditional Hanok Village instead.

OnTuesdays, the Gyeongbokgung palace and National Folklore museum are closed, andyou will go to Deoksugung palace and The Presidential Blue House Museum instead.

Hotel pickup and drop-off in Seoul

Royal guard changing ceremony might be cancelled due to weather conditions

On Mondays, Changdeokgung Palace is closed and you will go to Bukchon traditional Hanok Village instead

On Tuesdays, the Gyeongbokgung Palace and National Folklore museum are closed and you will go to Deoksugung Palace and The Presidential Blue House Museum instead