Full-Day Tour In Hyderabad Including Lunch With Locals

Full-Day Tour In Hyderabad Including Lunch With Locals 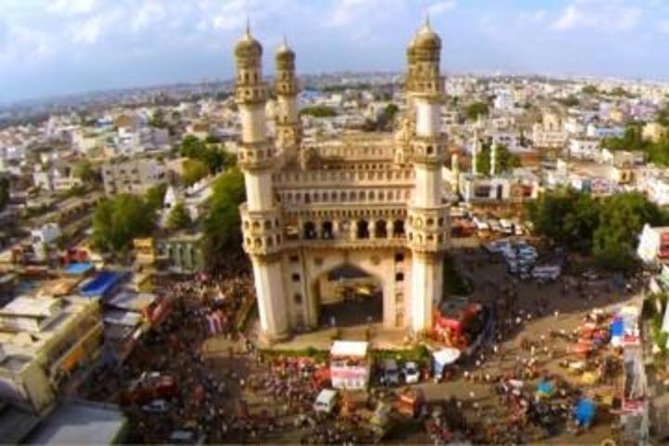 Your enduring day starts with the visit to one of the worlds impregnable fort:GOLCONDA, resting on a 130mtrs granite hill with huge crenulated ramparts surround this structure. Guides; non stop narration of yester years glorious past takes you back to 1143AD, began by Hindu Kakatiya rulers, latter many dynasties till 1687. The tour continues to cover Qutub shahi tombs, withstood the test of time and natures vagaries. The lunch will be a nostalgic experience of ethnic Hyderabadi cuisine (Included). Further continue to an ethnic Old city centre of activities for a 3 hour walking tour around,Charminar, the landmark of HyderabadLatter walk around theLaad Bazarstreet, for bargaining of bridal accessories, lacquer Bangles, Hyderabad Attar, Mehndi and Antiques. See theChowmahalla Palace,Latter theMecca Mosque(10000 prayers at once). Enjoy the sip of Special Irani Tea with Osmania Biscuits.

After the historian / guide picks from your place of stay drive 12 kms to witness the perfect climb of 360 steps one way to the see fascinating views from (400 ft) the Baradari; plains and the royal necropolis. Explore one of the worlds impregnable fort:GOLCONDA, built between 1143 - 1687 AD. Eight kms outer wall with 87 semi-circular bastions and 8 gates fell to the marching Aurangzeb in 1687. Fabled treasure likeKoh-i-noorwas looted. Huge blocks of cut stone butting onto natural outcrops of granite, with several buildings for living, treasury, harems, mosques, baaghs, baths and barracks.Royal Necropoliswith their own mosques are located, North West of the fort, out through Banjara Gate.

After ethnic HyderabadiLunch(included) continue to walk aroundCharminar, the landmark of Hyderabad Masterpiece of Qutb Shahi Architecture of 1591. Stone and Stucco plastering Minarets raise to 180 ft from the ground. Built to celebrate deliverance of the the city from Plaque. Stairs are closed on Fridays. Climb the narrow steps for panoramic view of the city.Latter walk around theLaad Bazarstreet, next to Charminar, for bargaining of bridal accessories, lacquer Bangles, Hyderabad Attar, Mehndi and Antiques. At the end of the street turn left to see theChowmahalla Palace(replica of shah of Irans palace in Tehran). Latter walk into theMecca Mosque(10000 prayers at once) of Belgian Crystal Chandeliers, completed in 1694 by 8000 masons in 77 yrs, finished by Emperor Aurangzeb. Nizam Kings are buried here. The tour ends with a taste of ethnic Irani Tea and Osmania Biscuits at the corner of Charminar

Hotel pickup and drop-off (if option selected) within city hotels