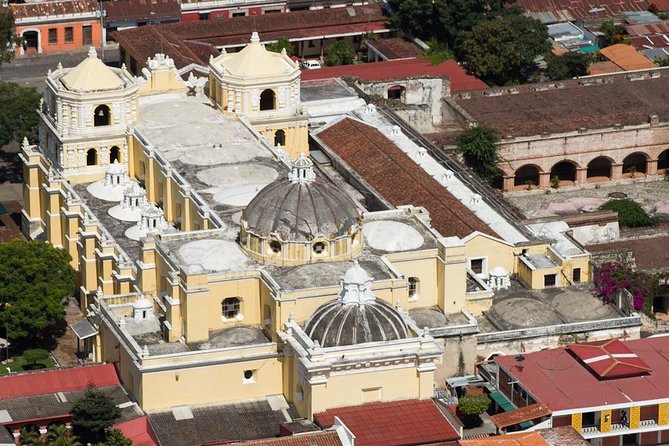 Visit city sites and a preserved colonial heritage in a valley with three mighty volcanoes during this 8-hour guided tour. The wonderland of Antigua guatemala, commonly referred to as just Antigua or la Antigua, is a city in the central highlands of Guatemala famous for its well-preserved Spanish Baroque influenced architecture as well as a number of spectacular ruins of colonial churches. It has been designated a UNESCO World Heritage Site.

Simple gathering spot with trees, a central fountain & benches, plus nearby vendors & eateries.

La Merced Church is a baroque church in Antigua guatemala,

The Santa Catalina Arch is one of the distinguishable landmarks in Antigua guatemala, Guatemala, located on 5th Avenue North. Built in the 17th century, it originally connected the Santa Catalina convent to a school, allowing the cloistered nuns to pass from one building to the other without going out on the street.

Antigua Guatemala Cathedral is a Roman Catholic church in Antigua Guatemala, Guatemala. The original church was built around 1541, but suffered several earthquakes throughout its history, and the first church building was demolished in 1669. The cathedral was rebuilt and consecrated in 1680

En of tour at 5:00 PM and return to Guatemala to your Hotel or to the meeting point.