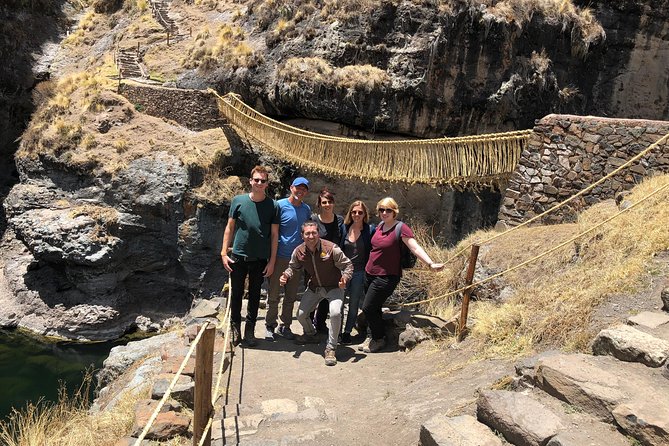 The full day tour of Qeswachaka Bridge is an absolutely unique tour. This tour will take you to some lesser known but amazing attractions within the Cusco region. On this tour you will see the beautiful four lakes of the highlands of Pomacanchi and Qeswachaka, the famous and ancient Inca bridge made of vegetable fiber. This new tour is not as popular with tourists and will allow you to take in the amazing sites in a more peaceful manner. You will also have the opportunity to interact with members of local indigenous communities who don't see many tourists. Tourism helps these communities sustain their way of life.
Places visited on this tour:
Combapata Viewpoint
Apurimac Viewpoint
Qeswachaka the Last Inca Bridge
Pampamarca Lake
Asnacqocha Lake
Acopa Lake
Pomacanchi Lake
Rumi Punku

We will pick you up from your hotel/hostel in Cusco at 6:00.a.m You will then have a two hours hour van journey to the town of Combapata where will have our local breakfast(made of local cereals like quinoa, quiwicha, maca). After this will continue drive for 15 minutes until we will get the Combapata viewpoint, from which you can enjoy the beautiful landscapes and see where the Salcca River meets the Vilcanota, the Sacred River of the Incas. Then We will continue our journey to Yanaoca, one of the eight districts in the Canas province of Cusco. From Yanaoca, we will drive thirty minutes more to the Qewe district, where you will have your first glimpse of the ancient bridge suspended between the sheer rock cliff faces as we drive down a series of stunning switchbacks into the Apurimac canyon.

We will leave the car and descend a steep path to a viewpoint for taking photos, before carefully crossing the bridge together! Get ready for the adrenaline rush of a lifetime as you make your way across the swaying bridge, and try not to look too closely at the river several meters below! On the other side, the bridge attendant will greet us and give a brief demonstration of the bridges history and construction.

After visiting the bridge, we will drive to the regions where the four famous lakes are: Pampamarca, Asnacqoccha, Acopia, and Pomacanchi. Set like jewels among the gold-green hills, they shine in the warm, afternoon sun as native flamingos and other birds fly and feed around their edges. will stop in one of the lakeshores to set our picnic blanket and enjoyed our lunch

Finally, you will be taken to explore Rumi Punku before you return to Cusco at about 4:30 am to 5:00 pm

Pick up from your hotel

Local Breakfast ( made of Andean cereals like quinua and anothers cereals)

Professional tour guide who is fluent in English

Roundtrip Transportation; we use private car and minivans, which are very comfortable and come with all necessary safety features. Our driver has several years of experience and is an expert at navigating the narrow mountain roads

Box lunch for the day tour

Wear Confortable clothes and comfortable walking shoes for the tour

Where is Qeswachaka? Qeswachaka is located four hours from Cusco by car, on the edge of Apurimac canyon, in the Quehue district of Canas province. Can I cross the bridge? Yes! All visitors are welcome and encouraged to cross the bridge; however, this is not recommended for visitors with vertigo. What is the length of the Qeswachaka Bridge? The bridge is approximately 28 meters (99 feet) long and 1.2 meters (4 feet) wide. When does the tour start and finish? Since the location is four hours away, we will have an early start at 7:00 a.m. The tour finishes at 7:00 p.m. What does the tour consist of? Is this a walking tour? This is mostly a bus tour, with various stops at points of interest. Is there a toilet on the bus? No, however we can stop for toilet breaks. What is the maximum altitude? The maximum altitude we will reach is 3,800m/12,468ft. What will I do if I suffer from altitude sickness? We will treat you accordingly. We carry oxygen cylinders and altitude tablets