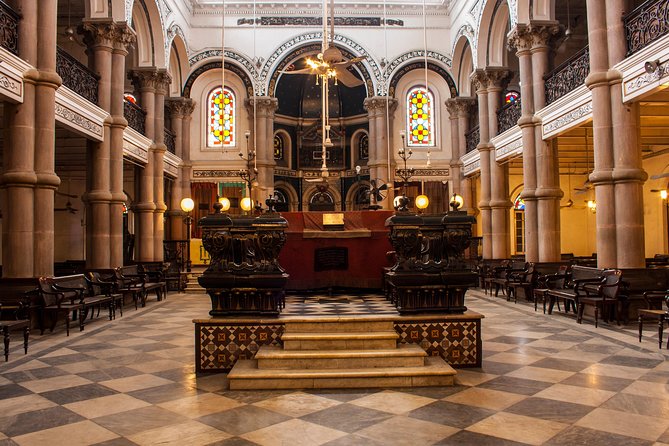 Explore Kolkata, the second largest city of India, its rich cultural and spiritual past in this full day tour of the city which takes you to some of the oldest temples, churches, and synagogues representing the beautiful culmination of different religions.

Itinerary
This is a typical itinerary for this product
Stop At: Dakshineswar Kali Temple, Near Bali Bridge P.O. :Alambazar, Kolkata (Calcutta) 700035 India
Start your day at around 8:00 in the morning with your guide picking you up from your hotel. The first stop on the tour is the Dakshineshwar temple, one of the most revered temples of Kolkata dedicated to goddess Kali. This 18th-century temple is an architectural marvel with a height of 100 ft and a massive courtyard
Duration: 25 minutes
Stop At: Belur Math, Belur Rd Howrah, Belur 711202 India
The second spot on the itinerary is the Belur Math temple which is separated from the earlier one by river Ganga. Take a fun ferry ride like a local to reach this site which attracts people of a different faith from across the world! The temple is a place for pilgrimage for people of different religious faith and exudes a sense of peace like nowhere else!
Duration: 20 minutes
Stop At: Maghen David synagogue, 109 Biplabi Rash Behari Basu Road Corner Braebourne Road and Canning Street, Kolkata (Calcutta) India
After this, take the ferry back to reach your car and head towards your next destination, the Magen David Synagogue. One of the largest synagogues around Asia and an important site tracing the origin of Jews in Kolkata, the place will have you swooning with its architecture and the intricacies.
Duration: 20 minutes
Stop At: Jain Temple - Kolkata, Raja Dinendra Street, Maniktala Near Sham Bazaar, Kolkata (Calcutta) India
Next on the line is the pristine and utterly stunning Parasnath Digambar Jain temple. One of the most revered shrines for people of Jainism faith, this temple has a scenic appearance to itself with beautiful garden decorated with glass mosaics and silver European styled deities. Dont forget to see the lamp which has been perpetually burning since the inception of the temple, i.e 1867!
Duration: 25 minutes
Stop At: St. John's Church, 2/2, Council House St, opp. Dewars Garage, Lal Dighi, B.B.D. Bagh, Kolkata, West Bengal 700001, India
Before proceeding to your last stop, stop for a hearty Bengali lunch (at your own expense) at one of the best-known local restaurants and once youre through proceed further to your last stop at the St Johns Church. One of the first few buildings erected by the East India Company, the Church is also called as the Stone Church built in the Neoclassical architectural style with its interiors decorated with beautiful wood carvings and marble bass relief work. The Church also holds many important memorials including Job Charnock, the founder of Kolkata. End your tour with a flavoursome masala chai in earthen cups with your guide before the driver drops you back at your hotel
Duration: 25 minutes
Stop At: Kalighat Kali Temple, Kalighat Road, Kolkata (Calcutta) India
Travel further, to the next destination, the Kalighat temple. One of the 52 Shakti peeths (places where the various parts of Sati's body are believed to have fallen, in the course of Shiva's Rudra Tandava) of India. An extremely important pilgrimage site this temple is dedicated to goddess Kali and attracts a huge number of devotees around the year. Explore this site as your guide acquaints yours further with Hindu mythology.
Duration: 20 minutes