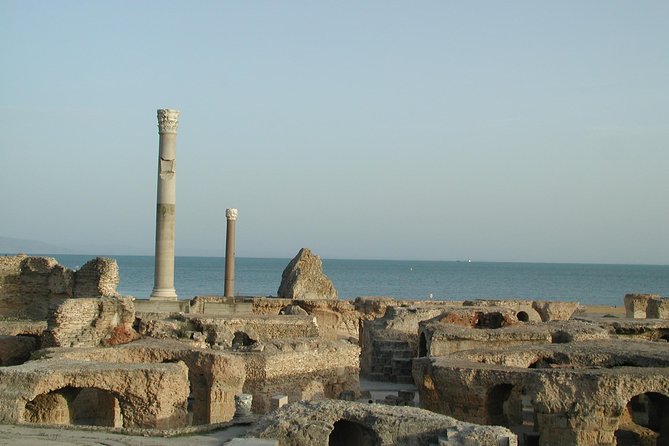 On this full-day tour of Tunis you will visit the spectacular Bardo Museum, explore the ancient ruins of Carthage, and visit the unique town of Sidi Bou Said. This tour is the ideal way to discover the history and culture of Tunisia while visiting 3 major attractions.

Departure to Carthage, founded by the Phoenicians in 814 BC. The earliest settlements of Punic Carthage can sill be seen on Byrsa Hill, just below the renowed Carthage National Museum. Although destroyed by the Romans in 146BC and later built over by them, recent excavation has revealed the foundations of five-story Punic houses, each with its own cistern and drainage system. The most remarkable early remains are the two basins of the Punic Ports, an evidence of the Carthaginian mastery of the sea, which fascinated and frustrated the Romans. Another important site of pre-roman Carthage is the Tophet, a burial ground and a sanctuary of the Punic deities Tanit and Baal.

Sidi Bou said: Perched high atop of a cliff overlooking the Mediterranean, this picturesque village is a delightful place for a leisurely stroll through winding cobbled streets. Its trademark white walls, contrasting sky blue doors and ornate window grids, make for a wonderfully inspiring setting. Wander around the boutiques for souvenirs or relax at a cliff-side Moorish caf.

After taking lunch at a local restaurant, transfer to Bardo. The Bardo museum is housed in the bey of Tunis former palace. Famous for its Roman mosaics taken from archaeological sites all over the country, it is widely considered one of the best collections in the world. Just when you think that youve seen the best, the next room reveals something even more wondrous! Though the Bardo is primarily about mosaics, it also houses the most important finds from Tunisias archaeological sites. Continue to the Medina (the heart of historic Tunis) one of the best preserved Islamic cities in the world. Walk through the meandering streets, viewing the architecture of some residential quarter, as well as the activity and excitement of the souks. Also see the great Mosque of Djamaa-ez-Zitouna, walking through Souk Echaouchia (Traditional cap makers market) and Souk El Attarine (Perfume market).