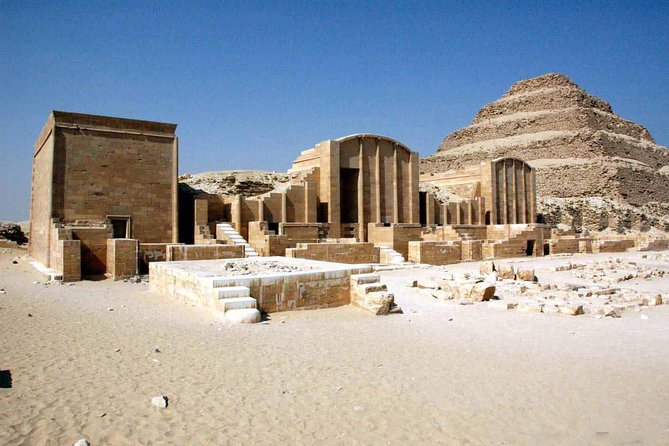 This tour includes; The ruins of Memphis, The Funeral Complex of King Djoser & the Step Pyramid of Sakkara, entrance to the site of the Pyramids of Giza and the Sphinx.

In the morning your guide will pick you from your hotel to start your tour by proceeding to Memphis. This was once was a Capital of the Great Kingdom, however today the city itself no longer exists, apart from the mud-brick ruins in the countryside. The reason being, Royal Palaces were built out of Mud-brick, a material which is not solid enough to stand for the annual flood of the river, especially when the Capital was changed to Luxor, then Alexandria, and there was no maintenance for the ancient City. Saying that, it does not mean there is nothing left to see, there are still some remarkable monuments used to decorate the Cult temple of Memphis which was dedicated to God Ptah and his holy family. Remains include the beautiful Statue of Ramsis II, the New Kingdom Sphinx, which is the second largest sphinx of Egypt. You will then will proceed to Sakkara.
Sakkara, not far from Memphis is on the borderline between the fertile valley and the western Desert. Sakkara is the official necropolis of the old kingdom, a vast area, contains hundreds of tombs, mastaba-tomb and pyramids. The area dates back to thousands of years ago and was designed to preserve bodies, keep their possessions, in a hope of a resurrection day. The most famous landmark in Sakkara is the Funeral Complex of King Djoser, designed & built by his intelligent architect "Imhotep", who tried to remind the king of everything he did in his life, his coronation day, his realm and provinces, and above all, the first Pyramid ever build in Egypt, the Step Pyramid of Sakkara. You will proceed to the Pyramids in Giza. En route you will enjoy lunch that will consist of local Egyptian food at local restaurant.
After lunch you will arrive at the Pyramids of Giza. About 15 km to the north of Sakkara lies a high plateau that is used to overlook the river, nowadays it is called the Giza Plateau, which was used by the Necropolis of the Kings of the 4th dynasty, (c. 2580 c. 2520 BCE). On this plateau, three main pyramids were built, the pyramid of Khufu (Cheops), the Pyramid of Khafre (Chephren) and the Pyramid of Menkaure (Mycerinus). A father, son and grandson built the 3 pyramids to keep their mummies and their personal possessions, pits that contained wooden boats to sail in the underworld, minor pyramids for their wives & daughters, hundreds of Mastaba-tombs for their high officials, family members, and the famous Sphinx which was sculptured near the river valley to protect the area, with a body of a lion, and a head of a philosopher king.
At the end of the tour you will be transferred back to you hotel.