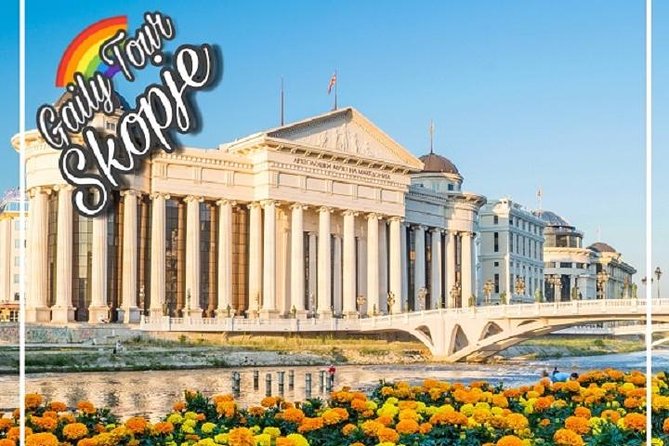 Itinerary
This is a typical itinerary for this product
Stop At: Holocaust Memorial Centre, Old Jewish Quarter, Skopje 1000 Republic of North Macedonia
GAILY TOURS in SKOPJE
Get ready for special tours in this amazing city !
Meet our Gay/Lesbian Tour Guide for a private walking tour of Skopje and experience one of the more surprising cities in the world.
Skopje Gay Friendly Tour & Holocaust's Secrets
Enjoy a very special LGBT Friendly Tour in Skopje and learn more about the national heritage history, its legends and the history of Mother Teresa. Visit of the Old Railway station and the Memorial House of Mother Theresa (entrance fee included), City square and many monuments from the project Skopje 2014. After that continue to the old part of Skopje over the Stone Bridge which hides many mosques and speaks of the rich and organized spiritual life of the Muslim community during the Ottoman Empire. Take a look to the Jewish quarter where you will see the Museum of Holocaust. The recently-opened Holocaust Memorial Center in Skopje is an imposing structure, located in what was once a Jewish neighborhood. It is the fourth such memorial worldwide dedicated to Holocaust victims, after Jerusalem, Berlin and Washington and it's a memorial to the holocaust of the 7,148 Jewish people from Macedonia and the history of the Jewish people in the Balkans. It's a multimedia center that consists of several functional parts. After the Momorial, reach the Old Bazaar where you will have time for shopping !
Included:
* Gay or Lesbian Friendly Tour Guide for City Tour (3 hours)
* Entrance Fee - Memorial House of Mother Theresa
* Entrance Fee - Holocaust Memorial Center