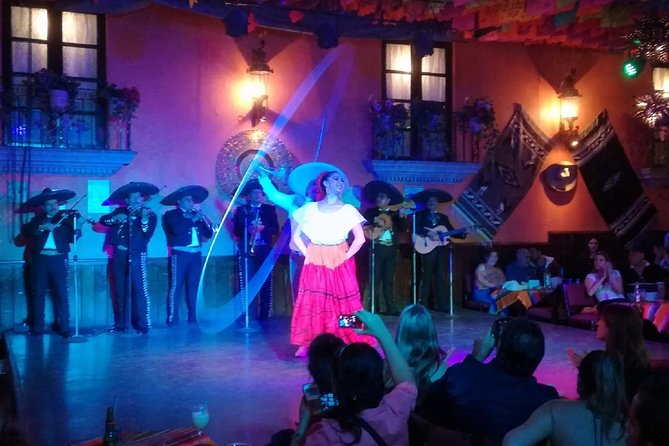 See the vibrant Mexico city streets at night on this unique Garibaldi night tour! Visit the Zocalo (main square) to admire its illuminated monuments and continue to the famous Plaza garibaldi, the meeting place of the mariachis. Experience the culture of Mexico city with live music, dancing and a symbolic cockfight.

Your guided tour begins with a visit to the Zocalo, the main plaza located in the heart of Mexico city. The Zocalo is one of the largest city squares in the world and is bordered by the Cathedral to the north and the National Palace to the east. You will see both monuments lit up on your night tour. The Zocalo is just one of many astonishing spots in Mexico City.

Continue to Plaza garibaldi, a meeting place of the most famous Mexican musicians, the mariachis. You'll visit a restaurant in Plaza garibaldi for a classic Mexican show to learn about the folklore and traditions of Mexico. While here, you'll see a short, symbolic cockfight, recognized as an ancient form of entertainment in Mexico. Listen to the live music, enjoy your complimentary drink and dance the night away.

Note: Be aware that cockfighting is legal in Mexico and yet has been heavily debated both locally and internationally. It is considered a blood sport by its opponents, but its followers believe it to be a cultural tradition in Mexico. We are sensitive to the issues surrounding cockfighting and recognize that this tour is not suitable for everyone.

Hotel pickup and drop-off for hotels outside the pickup zone