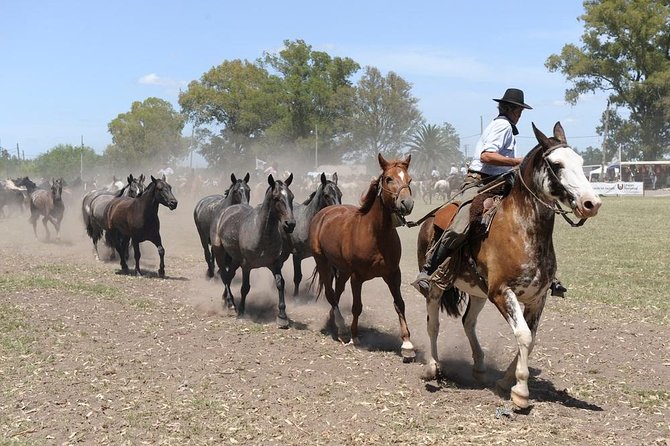 Spend a day in the Argentina countryside on this full-day tour from Buenos aires to Estancia Don Silvano, a traditional ranch where youll enjoy a full 'fiesta gaucha' (gaucho party) experience. Loosely translated as the South American version of cowboys, gauchos are residents of the Argentina plains. The gauchos of Don Silvano will provide you will a fabulous day of ranch activities, horseback rides, snacks, a BBQ lunch, dancing and a performance of their superb horse-riding skills.

Depart Buenos aires in a comfortable coach for the scenic ride through the Argentine pampas (plains) to Estancia Don Silvano. When you arrive at the estancia (ranch), your day of gaucho fun begins with a friendly welcome reception including empanadas, wine and juice.

Visit some of the ranchs attractions, and then, watch the gauchos saddle up the horses, and take off on a leisurely horseback ride through the countryside.

Back at the ranch, tuck into a delicious BBQ lunch of grilled sausages, ribs and chicken accompanied by potato salad and ice cream. Red and white wine, soda, water and coffee are also all included. During lunch, be entertained by a folkloric song and dance show, and then work off your meal by participating in some traditional Argentine dances. Later, go for a carriage or tractor ride, and then watch the gauchos show off their incredible horse-riding skills with ring races and other performances.

Before heading back to Buenos aires, enjoy a glass of mate (an Argentine drink of yerba mate leaves steeped in hot water) accompanied by sweet cakes with quince jelly.

Passport name, number, date of birth, expiry and country is required at time of booking for ALL participants

IMPORTANT: You must bring your passport at the time of the tour as there may be checks during the trip