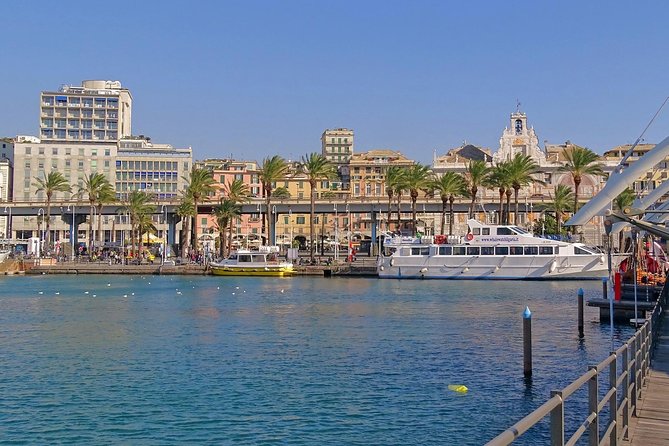 Join this private walkin tour to discover the city of Genoa, one of Italys best kept secrets. Marvel at its Medieval buildings, the XVI century frescoed palaces, its Baroque votive chapels and the beautiful churches overlooking truly picturesque squares.

Join this guided tour of downtown Genoa, alarge sea port, an architectural wonder, a fascinating city of art and history and one of the Italy's major economic centres.With its alluring charm and a great artistic heritage, Genoas medieval center - the largest in Europe and partly a UNESCO site is an intricate maze of alleys.

Follow your local guide through the old center of the city where,among traditional shops and little restaurants, you will breathe the noble past of the city. Starting fromthe renovated Old Harbour and passing by the majestic Palace of Saint George, you willwalk through the intricate maze of the medieval alleys and reachSt. Lawrence Cathedral, the city's cathedral built in a Gothic-Romanesque style.

The tour continues to reach Piazza De Ferrari, hearth of the city, with the Opera House, the Palace of the Dogesand the Academy of Fine Arts.There is also a house whereChristopher Columbusis said to have been born.

After passing by Piazza San Matteo, the guided walk will end in Strada Nuova(now Via garibaldi), inscribed on theWorld Heritage List since 2006. This district was designed in the mid-16th century to accommodate Mannerist palaces of the city's most eminent families: thereyou will admire some splendid historical buildings and palaces, which represent the "golden era" of the ancient Republic of Genova.

Just one tip:you might want to bring your camera along!

The tour will take place even when it's raining. In the event of an exceptionally heavy rain the tour may be cancelled and you will be given a full refund