Get Acquainted With Riga On Customized Private Tour

Get Acquainted With Riga On Customized Private Tour 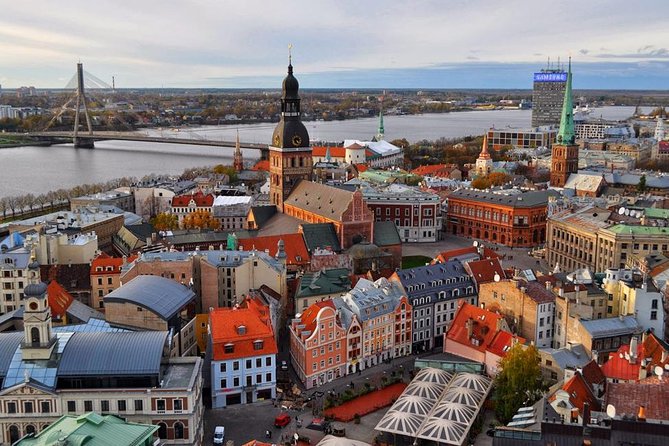 Make the most of your visit to Riga with our fully customizable private tour. Choose what you want to see and when, and our expert managers will help you put together your perfect itinerary. Highly professional private tour guides, expert drivers and fast-track admission to museums will make your trip to Riga a truly memorable one!
Meet your guide in the lobby of your hotel. The guide will have a sign with your name on it.
According to your pre-selected museum preferences, your guide will already have a fully customized tour program which you will follow during your private exploration of Riga.
We will happily customize each tour to include the sights that interest you most and will provide skip-the-line admission and special arrangements to maximize your experience. We care about our clients and want to make sure their tour time is used wisely and effectively.
Each day your tour will end at the location of your choosing - either back at your hotel or anywhere in the city.

Itinerary
This is a typical itinerary for this product
Stop At: Musee Art Nouveau, Alberta iela 12, Riga 1010 Latvia
The suddle but elegant northern art nouveau can be seen on many streets or Riga, with most buildings created by Konstantns Pkns, local architect. The quater between Albert, Strlnieku, Antonijas and Dzirnavu streets is famous for the most elegant art nouveau structures, where every next building is more impressive. The art nouveau museum is located right there, in the former apartment of Konstantns Pkns. It can be recognized from far away by the tall tower above the front of the house. Museum features the stunning room interiors, and its spiral staircase is one of the most impressive in all Europe.
Duration: 40 minutes
Stop At: Cat House, Meistaru iela 19, Riga 1050 Latvia
The Cat house is the most distinct building of the Old Riga with the two statues of the angry looking cats on the top of the building's towers. There are lots of legends about the origin of this symbols, and historians still debate about the true one. And the cats are watching the city from the tower tops.
Duration: 10 minutes
Stop At: River Daugava, Riga Latvia
The spectacular river embankment is a great place to enjoy the afternoon walk. The Western bank of the river has contemporary buildings, including the elegant wave of the National Library. The Eastern bank has the Old town buildings, including the Town Hall square with the House of the Blackheads. The significant landmark of the embankment is the statue of St. Christopher, hidden in the glass box, that is a popular lucky charm of the town.
Duration: 20 minutes
Stop At: Freedom Monument, Brivibas Laukums Central District, Riga 1050 Latvia
The freedom monument honours soldiers killed during the Latvian War of Independence (19181920). It is considered an important symbol of the freedom, independence, and sovereignty of Latvia. The sculptures and bas-reliefs of the monument depict Latvian culture and history. The memorial is located on the large pedestrian plaza on Brvbas bulvris, not far from the old town. The Guard of Honor at the memorial changes every hour between 9 a.m. and 6 p.m.
Duration: 10 minutes
Stop At: House of the Black Heads, Ratslaukums 7, Riga 1050 Latvia
House of the Blackheads is an impressive colorfull structure on the Town Hall square. It belonged to the society of merchants and ship owners, formed in 15th century in the Baltics. The current exterior of the building dates back to the middle of the 17th century.
Duration: 10 minutes
Stop At: Latvian National Opera, Aspazijas bulvaris 3, Riga 1050 Latvia
The Latvian National Opera building is a home to the National Opera company, which also includes the National Ballet, Chorus and Orchestra. Formerly the German theater, the building is the 1883 post fire reconstruction of the 1863 structure. The locating for the opera was determined during the grand new city planning in 1860th when Riga changed its status from the fort at the Russian border to the local regional center. The old fort's walls were turned down, giving the way to the wide streets and beautiful buildings.
Duration: 10 minutes
Stop At: Old City Riga (Vecriga), Kungu Iela 3 Riga, Riga 1050 Latvia
Old Town of Riga is famous for its cathedrals, old buildings, churches. Take a walk through the laburinth of the narrow brick streets, enjoying the colorfull buildings, little shops and sweet restaurants. See the famous Dome square and cathedral, Castle with the Castle square, Town Hall, house of the Blackheads and others.
Duration: 30 minutes
Stop At: Riga Castle, Pils laukums 3, Riga 1050 Latvia
The current castle dates back to 1515. It was the Livonian order residence, currently occupied by the president of Latvia. The castle is an impressive structure with the white walls, fat towers and red roof. After the 2013 fire, the castle is closed for renovation till the end of 2018.
Duration: 40 minutes
Stop At: Riga Cathedral, Herdera laukums 6 Centra Rajons, Riga 1050 Latvia
The cathedral is one of the most recognizable landmarks in Latvia, and is featured in or the subject of paintings, photographs and television travelogues. Like all of the ancient churches of the city, it is known for its weathercock on the top. It was built in 1211 on the high Daugava bank. The cathedral has the 2nd largest organ in Latvia. You can visit the regular organ conserts in the cathedral.
Duration: 25 minutes
Stop At: Riga Ghetto and Latvian Holocaust Museum, Maskavas iela 14a, Riga 1050 Latvia
The Riga Ghetto and Holocoust museum is a courtyard between Maskavas and Krasta streets. Its main feature is an ominously long wall covered with the names of victims of the Holocaust in Latvia. You can also look at Nazi propaganda, horrifying photos of tortured bodies, stills of ghetto life and grainy black and whites of old synagogues across the country, most of which no longer exist. There is also a little wooden house, like many other houses in Ghetto. Inside are the cubes that tell the stories of people who were murdered in WW2 times.
Duration: 1 hour
Stop At: Statue of Roland, Ratslaukums, Riga Latvia
A Roland statue is a statue of a knight with a drawn sword, signifying the town privileges of a medieval city, often associated with the Hanseatic Trade League. It's placed it the heart of the old town. Roland was rerspected as a patron of the trade, people came to his statue, seeking health, fortune, wealth.
Duration: 10 minutes
Stop At: Three Brothers, Maza Pils iela 19, Riga 1050 Latvia
The Three Brothers introduce us to the traditional architecture of the medieval Riga. These are the oldest residetional complex in the city. The White brother with the gothis steps on the roof is the oldest one with the unique stone benches at the door. The Middle brother is also middle of age. It features the Dutch architestural Mannerism with elegant window tops and unusual roof. The Green brother is the youngest. It features the strict but charming early baroque with the traditional Gable. The name was inspired by the "3 sisters" in Tallinn, which are the similar old buildings, standing next to each other.
Duration: 10 minutes