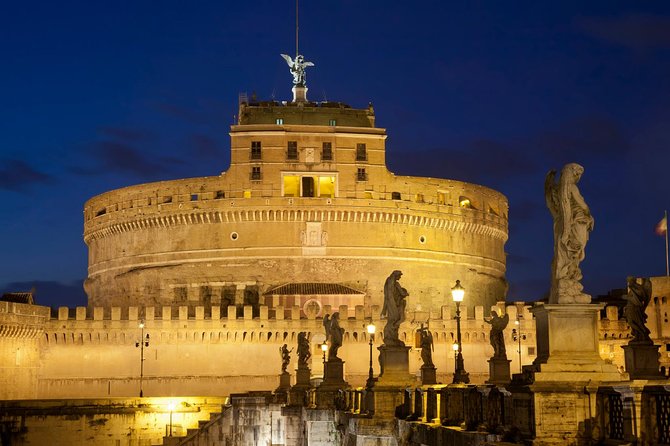 Summon the specters of the Dark Ages and rediscover the history Rome would rather forget. This night-time tour combines eerie sights you won't see on other tours, dark tales spun by a master storyteller and unique views of famous monuments, including Corso Vittorio Emanuele II, Campo de Fiori, and Castel Sant Angelo.

Pass By: Campo de' fiori, Rome, Lazio
Your expert local guide will reintroduce you to monuments you thought you knew, transformed by night-time illuminations, and describe how they were desecrated by citizens desperate for something to sell.

Pass By: Via Giulia, Rome, Lazio
You'll also hear about the Inquisition that turned neighbor against neighbor, roasted heretics on spits, and tried to suppress crime by hanging paintings of the Virgin Mary on street corners.

Pass By: Via del Governo Vecchio, Rome, Lazio
Dark times give rise to dark legends, and your guide, an experienced storyteller, will share some of these tales too.

Pass By: Piazza farnese, Rome, Lazio
As you traverse the Tiber river to enjoy some of Rome's gorgeous piazzas without the heat and crowds of the daytime, you'll hear the tale of the bridge haunted by a young girl tragically wronged by her family and the Pope.

Pass By: Museo nazionale di castel sant'angelo, Rome, Lazio
At the house of Rome's most notorious murderer, your guide will reveal what made this bloody figure surprisingly empathetic.

Whether you're here for hidden history, love legends and hauntings, or just want to sightsee without the usual crowds, this night tour is sure to reveal another side of Rome.

Government-imposed COVID restrictions for entering countries and venues (e.g. booster shot, negative COVID test, vaccine certificate with a QR code) may change with little notice. It is the responsibility of all visitors to ensure they check the official travel advice on the government websites.