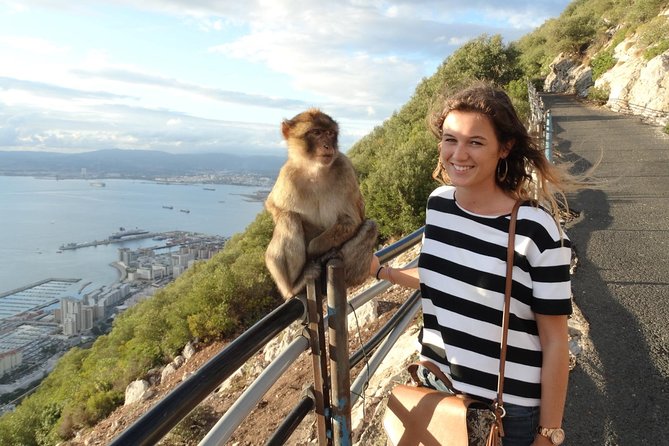 Visit the famous British city of Gibraltar and Vejer, considered one of the most beautiful town in Spain, during this private 10-hour day tripfrom Malaga. Spot the only wild primate in Europe,gaze at Africa from Europe's southernmost point, explorethe picturesque village known as White Towns of Andalusia whit peculiar architecture and small town feeling.Hotel pickup and drop-off are included.

Gibraltar is a British overseas territory under United Kingdom administration but claimed by the Kingdom of Spain. Gibraltar macaque (also known as "Barbary ape") was probably introduced by the Arabs from North Africa and is the only wild primate that exists in Europe. Although they are free to move throughout the country, they usually are agglomerated in the area of the protected area of the Rock. A superstition holds that if the monkeys leave the Rock, so will the British, so they are maintained by the local government.

An important city during Roman times, Gibraltar has preserved its old town charm, and blends scenic splendor with a modern vibe. While the 426-meter high Rock of Gibraltar looking across the straits to Africa is the main sight, other attractions include the Gibraltar Museum, where the territory's swashbuckling history is brought to life. Take a stroll along Main Street to see the Cathedral of Saint Mary the Crowned and the official residence of the Governor of Gibraltar at The Convent

The town of Vejer was declared a Historical Site and awarded the National Prize for the Beautification of Andalusian Towns. Its Moorish heritage is evident in the popular architecture and design of neighbourhoods like the Judera. It is perched on top of a beautiful hill overlooking the River Barbate. The town takes pride in its historic legacy from past civilizations such as the Phoenicians, Carthaginians and Romans. In 711 the Battle of La Janda was fought very near the town. After this battle, the Visigoths lost control of the Peninsula to the Moors.

The town of Vejer has always been walled and some of its towers are still well preserved (the Mayorazgo Tower, the San Juan Tower and the Corredera Tower), and its four medieval town gates are perfectly integrated in the town, namely the Segur Arch Gate, the Puerta de la Villa, the Sancho IV and the Puerta Cerrada. The Castle (11th-16th Centuries) stands at the highest part of the old town and can be reached through a beautiful horseshoe arch. It combines elements of Muslim and Christian architecture. The town also boasts some magnificent examples of religious architecture.

Other services not specified above