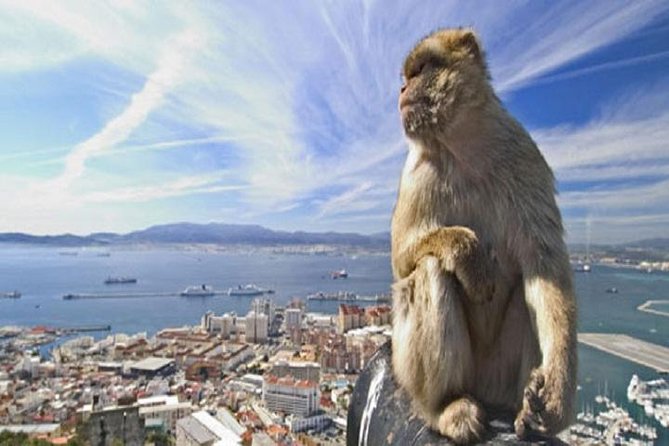 Do not miss the opportunity to visit a piece of the UK in southern Spain on this day trip from Seville, where the Mediterranean Sea and the Atlantic Ocean shake their hands in front of Africa. Amazing views, history, landscapes, battles and especially their friendly macaques (monkeys) are waiting for you.

You will leave Seville to aim to reach the border. Once you have crossed the border you will visit the main tourist attractions of Gibraltar with a local guide. Through this you will get a real sense of one of the most southern parts of Europe. You will then travel to the nature reserve where you will make a stop at the legendary pillar of Hercules.

Your journey will then proceed to the caves of San Miguel, an incredible cave in the heart of La Roca which translates directly as The Rock. La Roca has some incredible formation such as stalactites and stalagmites. Visitors will get the opportunity to see the apes of Gibraltar; these are the only ones that roam freely in the European continent.

The tour of the nature reserve will conclude with a visit to the losTneles del Gran Asedio which translates to tunnels of the great siege.The tunnels were excavated in the 18th century by English Soldiers who were at battle with Spanish troops.

After the tour along the top, you will have time to visit Main Street which is renowned for its range of shops and second hand markets. Its a great place to find some bargains and has really put Gibraltar on the map. After enjoying some free time you will then return to Seville.

Youth category is for Students (up to 25 years old) that hold a valid Student card, which will need to be shown to the staff

A current valid passport is required on the day of travel (or visa, if applicable)

Youth category price is for Students (up to 25 years old) that hold a valid Student card. Please do not forget to bring it with you.