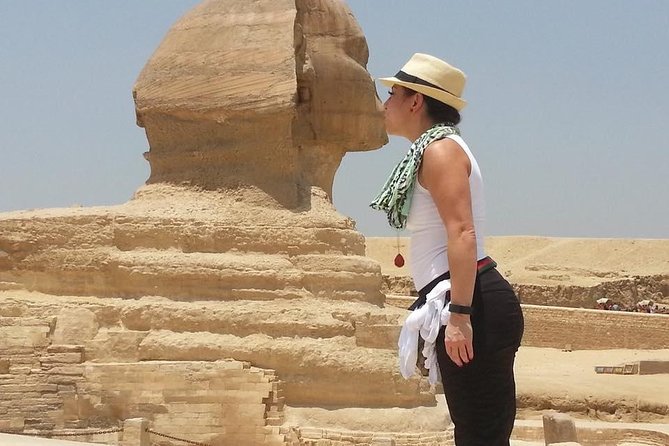 Take an 8-hour privatetrip to visit Giza complex, the three pyramids of the father, the son and the grandson, the Sphinx, the Valley Temple and Causeway of King Chephren. See the Tombs of the Princesses, the nobles and the two wooden solar boats. Visit the Egyptian Museum stroll along Al mazz Street. This tour includes lunch, entrance fees and Egyptologist tour guide.

Be picked up in the morning from your hotel and start the tour with a drive to the Egyptian Museum, considered one of the largest depositories of Egyptian antiquities anywhere. Spend approximately an hour at the museum, which now contains more than 120,000 objects, among which is the treasures of the funeral collection of King Tut Ankh Amun, discovered in 1922. There were originally more than 3,500 pieces, of which 1,700 pieces are exhibited in the museum.

After, drive to the Giza necropolis where you see one of the ancient seven wonders of the world, the Pyramids of Giza, built by kings of the fourth dynasty, Cheops, Chephren and Mycrinus, father, son, and grandson. During this approximate 3-hour visit you will also see the Sphinx, considered the guardian of Giza necropolis, in a form of a recumbent lion with a human head, which probably portrays the features of King Chephren, builder of the second pyramid.

Later, walk through Al Muizz Street with its medieval buildings and mosques, and have an hour for lunch. Be driven back to your hotel at tour's end.

One bottle of mineral water per person

Entrance to the Mummy Room, interior parts of Pyramids and tombs not included in general museum admission

A minimum of 2 people per booking is require