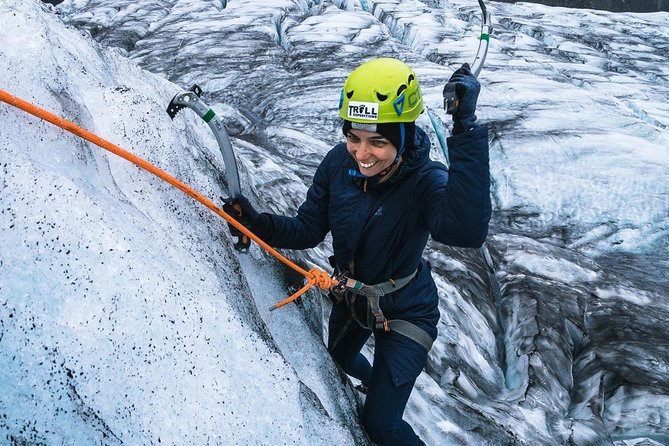 This unique tour gives you the opportunity to hike on an outlet glacier as well as climbing the ice walls. You will start with exploring the ice formations of the glacier and the moulins, then experience the amazing feeling of climbing a beautiful blue ice wall. For everyone, from first-timers to more experienced climbers, our expert guides will make this tour an adventure to remember. Max group size 6people.

You will meet your experienced guide at Skaftafell Information Centre Parking lot and from there you will be driven to the root of Svnafellsjkull, which is an outlet glacier of the Vatnajkull Ice cap. The glacier is a part of the tallest mountain range in Iceland, and the highest peak in the country, Hvannadalshnkur is easily seen from the glacier on a clear sky.

Before stepping on the ice, your guide will gear you up and provide you with the neccessary safety equippment needed for this glacier expedition and teach you how its used.
During the glacier walk you will be exploring the breathtaking ice formations and moulins while learning how they are formed and constantly change. You will also be able to attempt to conquer gravity when you get the chance to climb up the ice walls with ice axes and crampons. You will be in the safe hands of our experienced guides who will make sure the experience will be both safe and enjoyable, giving you instructions on the technical aspects of ice climbing through a step by step approach.

Never been on a glacier walk before? Never used crampons or ice axe?No worries!Experienced guides will teach you all you need to know and have you walking safely on the glacier in no time. Safety equipment and briefings are provided before each tour. Nature is best experienced free of worries!

Make sure you sign up for this unforgettable experience and let yourself be amazed by the breathtaking scenery, while getting to know Svnafellsjkull Glacier, up close and personal. Check availability now by choosing a date.