Godfather Private Tour From Catania: Savoca And Forza D'Agro With Options Of Food, Wine Tasting And Dinner - With Reviews & Ratings 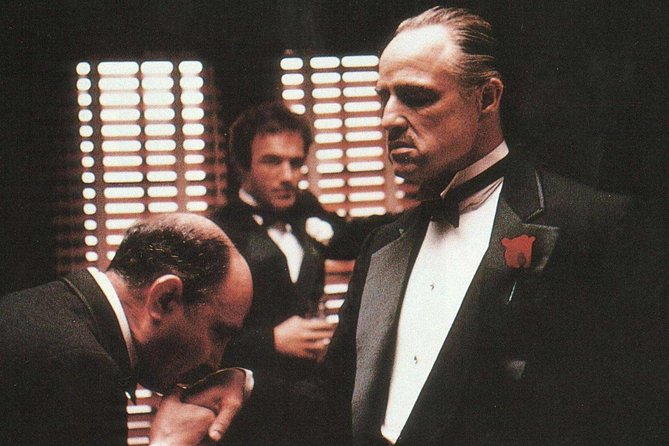 Private tour from Catania by comfortable car with personal tour leader to the must-see Sicilian hill towns world-known thanks to F.F. Coppola, who filmed his legendary "The Godfather" here, Top 3 of the Greatest American Movies. Get the friendly and informative insight into the filming process and interesting trivia, learn the real Sicilian Mafia story, its structure, rise and development, and anti-Mafia fight. Discover the history and culture of the movie locations and Sicily itself, and feel the romantically rustic atmosphere of old Sicily. Walk along the authentic streets of Savoca and Forza dAgro remained unchanged since the movie was made, visit ancient churches, Bar Vitelli where Michael spoke to Apollonias father, and other locations. Optionally, you may have food and wine tasting on a terrace with a breathtaking view of the sea and surrounding countryside at one of the best wine bars in Savoca, and have traditional fish dinner at a fine fish restaurant in Forza D'Agro.

Stop At: Via etnea, Catania, Province of Catania, Sicily

During "The Godfather" tour, you will walk along the authentic picturesque streets of Savoca and Forza d'Agro remained unchanged since the movie was made, visit ancient churches, famous Bar Vitelli where Michael Corleone asked Apollonia's father her hand in marriage, church where they married, and other movie locations. Optionally, you may taste perfect Sicilian wines and locally produced food sitting on a terrace with a panoramic view of the Ionian coast and surrounding countryside at one of the best wine bars in Savoca, and have traditional fish dinner at a fine fish restaurant in Forza d'Agro.
First stop is Savoca, an unspoilt medieval town that near Taormina that acted as stand-in for Corleone where Michael was hiding out during the "going to the mattresses" time. Here you will visit Bar Vitelli that looks exactly the way it did in the movie, and see the exact spot where Al Pacino informed Apollonia's father that his name was Michael Corleone, and that "there are people who'd pay a lot of money for that information, but then your daughter would lose a father instead of gaining a husband". Here you can take pictures with an authentic Sicilian shotgun "Lupara", see pictures from the movie and a mirror monument for Coppola, enjoy panoramic view of the Mediterranean opening from the square where the wedding ceremony scene was shot, purchase The Godfather souvenirs, and - "leave the gun, take the cannoli" - taste original Sicilian cannoli and lemon granita at Bar Vitelli. Then you will walk to an ancient church of Santa Lucia, where Michael and Apollonia were married kneeling in the doorway. Then follow the same path down the hill that the newlyweds did, and visit another old church dating back to the 13th century. Walking along the fabulous streets of Savoca, on a good day you can also meet some actors - for example a lady who played Apollonia's mother and who still lives in Savoca. Later, optionally you can visit Enoteca near Santa Lucia church, and on a terrace with romantic sea view taste Sicilian red and white wines paired with traditional food (locally produced cheeses, salami, prosciutto, caponata, home-made jelly, olives, extra virgin olive oil and fresh home-made bread).
The tour will continue in Forza d'Agro, another stunning hilltop town with a "Godfather" connection. You will walk the abandoned streets ("Where have all men gone?" - "They're dead from vendettas"), explore the historic square and see the pictures from the movie, visit ancient churches, see the piazza where young Vito Andolini (later Vito Corleone) escaped Don Ciccio's men by hiding in a basket on a donkey's back, walk up to see the remains of a 12th century Norman castle, admire delightful panoramic view of the Ionian coastline, and get a flavor of the Sicilian pastoral lifestyle remained unchanged since ancient times. Then, you can optionally have lunch or dinner at one of the best fish restaurants in Sicily and taste many kinds of traditional fish dishes with Sicilian red and white wines.

Private tour exclusively for your party nobody else, to ensure the highest standards for our guests.

Explanation of The Godfather movie and the real Mafia history