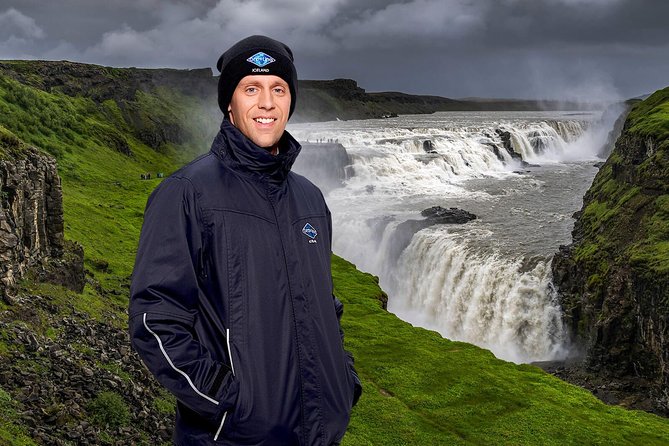 Discover some of the best sites in Iceland on this Golden Circle Tour where you will be in the company of a professional guide who will tell you all you need to know about the area's history, culture, and nature. Leave from Reykjavik and get into the history of Iceland at Thingvellir National Park, witness the powerful beauty of a multi-tiered waterfall at Gullfoss and walk among bubbling geothermal pools at Geysir Geothermal Area.

Learn about some of the thrilling and somewhat gruesome history of Iceland at Thingvellir National Park. Its significance is so great that it is a designated UNESCO world heritage site. You will walk the grounds where Icelandic democracy began and visit sites where Viking-era justice was carried out including the Drowning Pool and the Gallows Rock. Thingvellir is also the place where two tectonic plates are gradually separating creating a gorgeous landscape of steep cliffs and broad fields featuring Thingvallavatn, the largest natural lake in Iceland.

The Great Geysir, the first of its name, resides in Haukadalur in the Geysir Geothermal Area. The entire area is bubbling with geothermal activity from steam vents to boiling mud pits and the real stars of the geothermal show, the geysers.

While the Great Geysir erupts only occasionally these days, the last time being in 2016, nearby geyser Strokkur erupts regularly delighting onlookers by shooting hot water high into the air every few minutes.

The most popular waterfall in Iceland is, without a doubt, Gullfoss (the golden falls). Hearing the roar of the Hvita River as it plunges 32 meters over two tiers into the gorge below is exhilarating. On sunny days, rainbows are abundant in the mist rising from the falls and there are several paths available around the waterfall including one leading down to its bottom so come equipped with your raincoat and have your camera at the ready.

Pickup and drop off from selected locations (if requested)

Most travelers can participate.

This tour/activity will have a maximum of 100 travelers.

A small amount of walking is required to reach the sites.

The tour may be guided in two languages on the same bus.

Stops will be made during the tour at locations where facilities can be used and lunch and snacks can be purchased.

Foldable wheelchairs can be accommodated providing the passenger is accompanied by someone who can assist them board and disembark. However, be prepared for uneven surfaces at the sites visited which may be difficult for those with walking disabilities or using a wheelchair.

This experience requires good weather. If it is canceled due to poor weather, you will be offered a different date or a full refund.