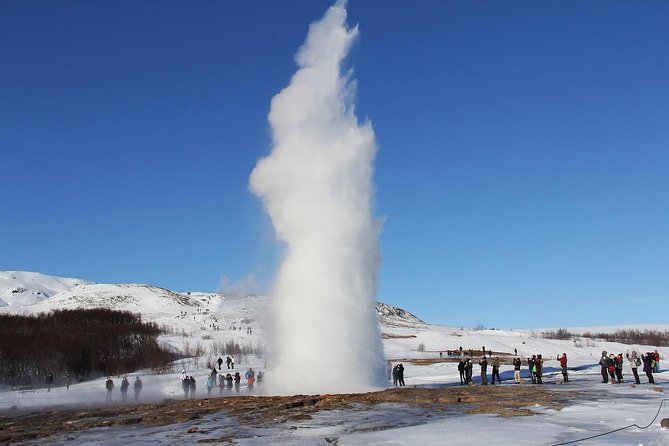 Book this excellently planned day trip from Reykjavik and enjoy a unique adventure! It takes you through the fantastic landscapes of this isolated volcanic island with 120 volcanoes, lakes, waterfalls, glaciers and hot spouting springs. See the highlights of the famous Golden Circle: Thingvellir, Gullfoss, Geysir, Laugarvatn, Faxi foss, and Kerid with a professional guide and enjoy a delightful journey.

Your first stop of the day is at the UNESCO World Heritage Site, Thingvellir National Park. Take a walk into the rift valley between the North American and Eurasian tectonic plates, and learn about one of the world's first parliaments, the Al-thing one of the oldest parliaments in the World created in 930 BC.

Next, continue heading eastward over the small mountain pass, Lyngdalsheidi, toward the town of Laugarvatn, which lies within the Golden Circle. We will  Keep moving along to the amazing waterfall Gullfoss which is known as the iconic waterfall of Iceland,

There will also be an opportunity to pick up some lunch (own expense) at the on-site cafe, just a 10-minute drive away from Gulfoss, or Geyser - the geothermal area with the famous hot spouting Geyser named Strokkur.

Walk around the colorful area surrounded by hot springs with names like The Blower, Litli Geysir, The Handyman, and The Bucket. After that, pay a short visit to the small but beautiful waterfall Faxi (or Vatnsleysufoss). The waterfall is located on the Tungufljt river.

We will do some extra stops to visit The Icelandic horse and the Beautiful waterfall Faxi.

Afterward, drive south and stop at Kerid, a 6,000-year-old volcanic crater lake located in the Grmsnes area. It's one of several crater lakes in the area, known as Iceland's Western Volcanic Zone. The caldera, like the other volcanic rock in the area, is composed of a red (rather than black) volcanic rock. a small fee of $4 to enter the area as this is a private area.

From here, ride back toward Reykjavik. The day finishes with a drop-off at a designated bus stop.

May be operated by a multi-lingual guide.

Travelers should have a moderate physical fitness level.

This tour/activity will have a maximum of 50 travelers.

Subject to favorable weather conditions. If canceled due to poor weather or road conditions, you will be given the option of an alternative date or full refund.

This experience requires a minimum number of travelers. If it is canceled because the minimum isn't met, you will be offered a different date/experience or a full refund.