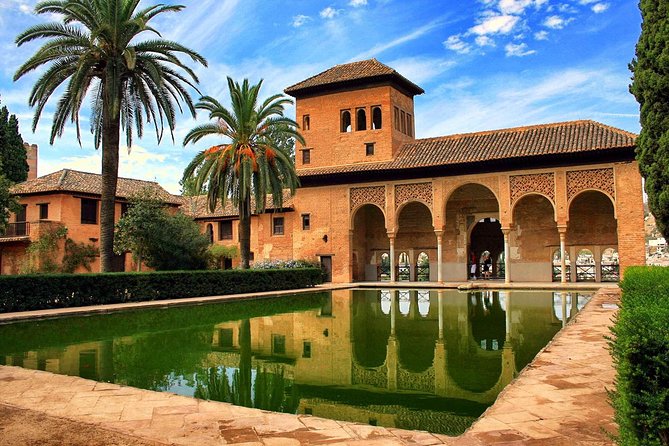 Enhance your experience of Granada and its UNESCO World Heritage-listed wonder on a full-day trip to the Alhambra from Malaga. Discover the beautiful city of Granada, land of the Alhambra, and of the marvelous Alhambra Palace with your knowledgeable guide. Enjoy the convenience of round-trip transportation from Malaga in a small group of up to 20 travelers.

The Alhambra, a Moorish citadel and palace, was built in the 13th century. It is declared a World Heritage Site by UNESCO and it is the most renowned building of the Andalusian Islamic historical legacy. Charles V, Holy Roman Emperor, demolished part of the architectural complex to build the Palace which bears his name in the 16th century.

The Generalife is a garden area attached to the Alhambra which became a place of recreation and rest for the Granada Muslim kings. The Generalife gardens are also declared a World Heritage Site by UNESCO.

Is the fortified military enclosure inside Alhambra.

Down again in the city center, you will also have free time for lunch and to explore the center of the city by yourself: visit the surroundings of the Royal Chapel, the Alcaiceria, Corral del Carbon, etc.

Panoramic and walking tour of the city.

Entrance fee for the Alhambra Palace and Generalife Gardens

Due to the policy of the Council of the Alhambra, all bookings must include for each passenger, without exception, the following data at the moment of reservation: Name and Surname all the passengers