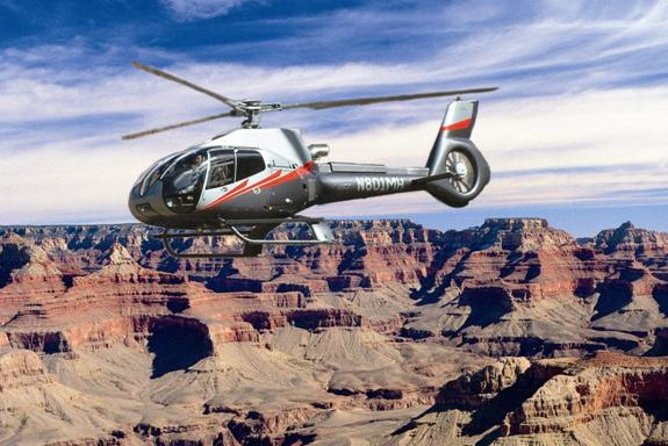 Experience the scenic beauty of Arizona on this small-group day trip from the Phoenix-Scottsdale area. Visit one of the world's wonders, the Grand canyon, and experience Route 66, the iconic American highway steeped in rich tradition, on a full-day trip. Once you arrive at the South Rim of the canyon, it's time to board a luxurious state-of-the-art ECO-Star helicopter for your 45-minute flight. Your aerial adventure begins with a view of the North Rim as you fly towards the eastern end of the canyon following the Colorado River. Experience amazing bird's-eye views as you head south through the Dragon Corridor, which is the widest and deepest part of the Grand Canyon. Following your helicopter flight, you will reunite with your Detour's guide and explore along the rim of the canyon, capturing its incredible beauty in your photographs.

Journey through the beautiful Arizona landscapes on this small-group trip from the Phoenix-Scottsdale area! Visit the Grand canyon and explore Route 66 on an exciting full-day tour.

After departing the Phoenix metro area, your tour travels through the expansive Sonoran Desert filled with the native saguaro cactus. The scenery begins to change with the increase in elevation and views of the cactus fade into pine trees. As you continue further into Northern Arizona, travel the outskirts of the Route 66 town of Flagstaff and from the highway, see the San Francisco Peaks among the seemingly endless Ponderosa Pine Forest, the largest contiguous forest of ponderosa pines in the world.

Williams will be your first stop along the tour for a chance to experience Route 66, the iconic American highway steeped in rich tradition. While in Williams, guests will have the opportunity to get their kicks on Route 66. Walk along the original route, explore the local shops, and capture souvenir photos highlighting a bygone era in classic American history. Also known as the Will Rodgers Highway, Route 66 is the most recognizable road in the United States and stretches 2,448 miles from Chicago to California upon completion. While you are enjoying Route 66, your guide will pick up your picnic lunch made fresh that morning.

Once at the Grand canyon South Rim, board a state-of-the-art helicopter for a 45-minute flight over the Grand canyon. You'll fly towards the eastern end of the canyon, following the Colorado River, over the picturesque Kaibab National Forest and through the Dragon Corridor, the widest and deepest part of the Grand canyon.
You will be picked back up by your guide and continue on to explore the Grand Canyon National Park. You can take in the natural beauty of the site by walking along the rim trail at one of the lookout points. Also, at the canyon, you'll have time to shop and capture incredible pictures of the canyon.
You will then head back on a scenic drive to theDream city church | phoenix/Scottsdale area.