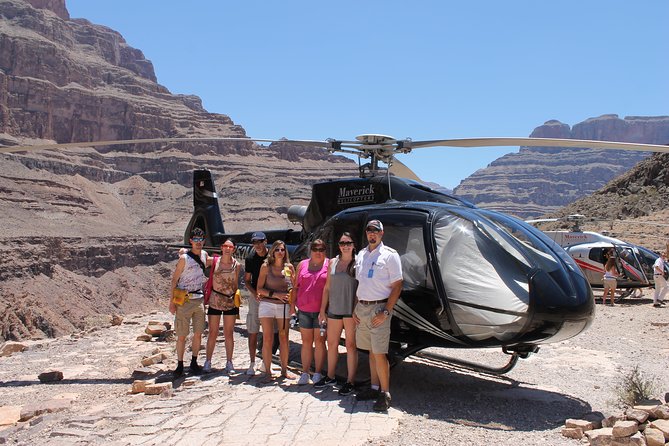 Enjoy an exclusive experience of the Grand canyon on this exciting helicopter tour from Las vegas! After a smooth, scenic flight over Hoover Dam and Lake mead to the West Rim, land on a private bluff deep in the canyon for a Champagne toast and snacks. No other Grand canyon helicopter tour lands this deep, so youll get an unparalleled viewing of the Grand canyon in all its glory. After soaking up the incredible scenery, fly through the Black Canyon back to Vegas, enjoying audio commentary along the way.
Likely to sell out! The Grand canyon Helicopter Tour regularly sells out weeks in advance. Book ahead of time to avoid disappointment.

Enjoy an exclusive experience of the Grand canyon on this exciting helicopter tour from Las Vegas!

After pickup from your Las vegas hotel by luxury van at your selected time, you'll be taken on a short ride to the Henderson Executive Airport, where you'll board a state-of-the-art helicopter for an exciting 40-minute flight to the Grand canyon.

Settle into your comfortable leather seat and enjoy a smooth, air-conditioned flight over Lake mead and Hoover Dam, both spectacular sights from the air. Large windows offer great views for all passengers, and you'll be provided headphones so you can learn about the sights you see through recorded commentary.

When you reach the Grand Canyon West Rim, descend 3,500 feet (1,066 meters) below the canyon rim -- deeper than any other Grand Canyon helicopter tour! Land on a private bluff overlooking the Colorado River, where you'll toast to this unforgettable experience with a glass of Champagne. Enjoy light snacks including vegetables, fruit, crackers and cheese under the shade of an authentic Native American Ramada shelter, and fill your camera with incredible photos of the steep canyon walls from this amazing vantage point. Your pilot will be happy to answer any questions you have about the canyon or your helicopter flight.

Hop back on the helicopter for your return flight to Vegas, this time flying low over Black Canyon and Fortification Hill, an extinct volcano. When you land, your driver will be waiting to whisk you back to your hotel.

There is a maximum capacity of seven people per helicopter, plus your pilot. Per FAA regulations, all passengers 18 years and older will be required to show photo ID such as a driver's license or passport at the time of check-in.

All taxes and fees

Due to the nature of this tour and the safety of all guests, the tour operator reserves the right to refuse service to passengers who are intoxicated or show signs of intoxication. If, as a result, your tour is canceled, you will not be entitled to a refund.

Due to comfort and weight / balance of the aircraft, passengers weighing over 300 lbs (136 kg or 21 stone) will be required to purchase an additional seat. This is payable directly to the tour operator on the day of the tour.

Children under 2 years are free of charge. Proof of age is required, such as a birth certificate or passport.

Per FAA regulations, all passengers 18 years and older will be required to show photo ID such as a driver's license or passport at the time of check-in.

Due to uneven terrain at the Grand Canyon, wheelchairs are not able to be accommodated.