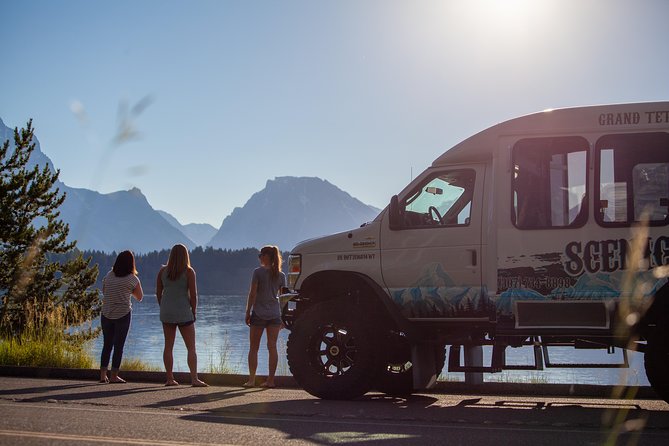 Take a 5-hour sunset tour of Grand teton national park including dinner at Signal Mountain Lodge, over looking Jackson Lake and the Teton Mountain Range. Roam the Antelope Flats in search of bison and antelope while an experienced guide shares a bit of history at the Shane Cabins. See what early life in Jackson Hole might have been like and eat at Signal Mountain Lodge with spectacular views of the Teton Range. Youll return to Jackson along the wooded MooseWilson Road, home to the North American moose.

Start your 5-hour tour with pickup at your accommodation in the Jackson Hole or Teton Village area. Heading north by luxury van, youll enter Grand teton national park. Keep an eye out for wildlife and receive information on the regionfrom your experienced guide.

There will be plenty of stops along the way to check out historical sites such as the Shane Cabins. Once you reach the dining venue at The Trapper grill located at Signal Mountain Lodge, you will have the option to sit outside on the deck and select from a full menu. Marvel at jaw-dropping views of Jackson lake and the Teton Mountain Range during the sunset hours.

On the return drive via MooseWilson Road, use provided binoculars and spotting scopes to search forthe occasional moose through the vans panoramic windows.

This evening tour is an ideal option for anyone who loves viewing wildlife in a stunning natural environment.

We provide you with binoculars, spotting scopes and history/wildlife resource materials.

We recommend you bring a camera, sunglasses and extra clothing layers

Transport is wheelchair accessible however be prepared for uneven surfaces at the sites visited which may be difficult for those with walking disabilities or using a wheelchair. Also must be able to get up & down 3 steps with assistance, if needed.